University of Washington Provost Phyllis Wise is facing growing criticism from students, faculty and lawmakers for taking a seat on the corporate board of Nike, which last year signed a contract with the UW worth a minimum $35 million to the university. 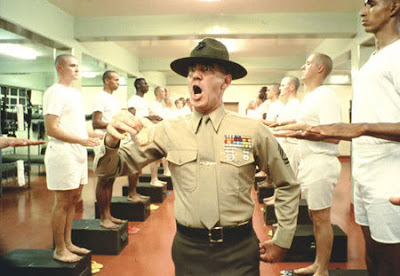 The union campaign has already had one positive effect – the administration’s new use of “Colleagues” as the salutation in their periodic emails to the faculty, instead of their customary “You unorganized grabastic pieces of amphibian shit”.

I can’t understand why the Provost left UO Matters off his list of approved websites though – aren’t you supposed to be neutral, Jim?

Actually, his http://hr.uoregon.edu/er/unionization/ site has some good basic info, check it out.

In our continuing efforts to bring you information regarding attempted unionization of faculty and unclassified employees at UO we have constructed a website at: http://hr.uoregon.edu/er/unionization/

The website currently contains more information on who is affected in these unionization efforts and a summary of the overall process. It will be updated regularly with new information and communications.

12/7/2009: Interesting op-ed from insidehighered.com on the UC systems troubles. The claim is that the universities are exaggerating the extent of the problem:

Even with the revelation that many of the top earners are administrators and that there are now more administrators in the UC system than faculty members, many tenured professors have sided with the administration because it is much easier to attack the state for all of the UC’s problems. By blaming the state and the anti-tax Republicans, there is a clear enemy and an easy narrative. Moreover, by placing the onus of responsibility on the state, the university does not have to look at its own internal problems.

Sound familiar? It’s worth a read. The author is a UC faculty member and union leader.

12/5/2009: The OPB show “Think Out Loud” is doing a show Monday on the subject of access to public records. This is about AG Kroger’s new “Government Transparency” Initiative. Among other important reforms Kroger has appointed DOJ lawyer Michael Kron as “Government Transparency Counsel”. Kron’s job responsibilities include ensuring that UO Counsel Melinda Grier obeys the public records law. He will be a busy guy. The show will feature a discussion with Attorney General John Kroger and a UO Professor with considerable experience extracting public records from UO, and I am pretty sure it airs at 9 AM, or at least that’s when they told me to be in the studio.

12/4/2009: This brief from UO law professor John Bonine to President Lariviere takes on UO General Counsel Melinda Grier and her claim that the faculty’s role in university governance is limited to student discipline and the curriculum. Quoting,

It is important that the University Senate, members of the ad hoc Internal Governance Committee, and individual faculty members understand the legal basis for and extent of the faculty’s role in university governance. The letter from the university president’s General Counsel mischaracterizes both. In this memorandum I shall explain its errors. …

Of even greater importance, the letter completely fails to cite the statutory grant of authority to the faculty that is contained in ORS 352.010. Following that failure, the letter asserts that the faculty’s authority “is not stated in detail” and “is not well-defined.” Combined, the letter gives an impression of the faculty’s role in governance that is quite misleading, as will be explained in the next sections of this memorandum. …

To an incorrect premise—that the statutory basis for the faculty’s authority is undefined while the president’s is plenary—the letter adds another premise without explanation or support. It asserts that “historically the faculty’s authority has been over the curriculum and the discipline of the students.”3 This limited view is also in error, as will be explained below. …

President Lariviere, it’s time to get a new General Counsel, and John Bonine should be on the hiring committee.

12/3/2009: The Oregon Public Broadcasting show “Think Out Loud” did an interview with President Lariviere today. You can listen to the interview and see questions here. (Click on the > arrow to start.)

Also, CJ Ciaramella has this story in the ODE, about UO accountability to the state. “I would like this faculty to come up with a set of metrics that will be meaningful to the average person and help them see how we’re doing,” Lariviere said. See our previous post “WTF? Ignorant anti-tax Texans vote to increase funding for research universities” for an example of how this actually has worked in Texas.

12/2/2009: Oregonian, RG, Jack Bog. This is – potentially – a very significant step towards the reform of Oregon’s public records process, and a nightmare for UO General Counsel Melinda Grier and her efforts to limit access to UO’s public records. From the ODOJ press release:

The online PR manual appears to be the direct consequence of pressure from a UO Professor who “illegally” posted the manual online, and from Carl Malamud at Public Resource. Kroger has abandoned his efforts to claim copyright to this manual. The new “Government Transparency Counsel” (Michael Kron) has a great title and we hope will have the authority to overrule Melinda Grier’s efforts to keep public records from the public. We certainly intend to find out!

Complete results from the recent survey of UO tenure track and tenured faculty about the proposed AAUP/AFT faculty/instructor/administrator union are posted here. Of 681 faculty surveyed 221 made some response. What does it all mean? Here are some basic tabs, more later. Out of 218 responses: 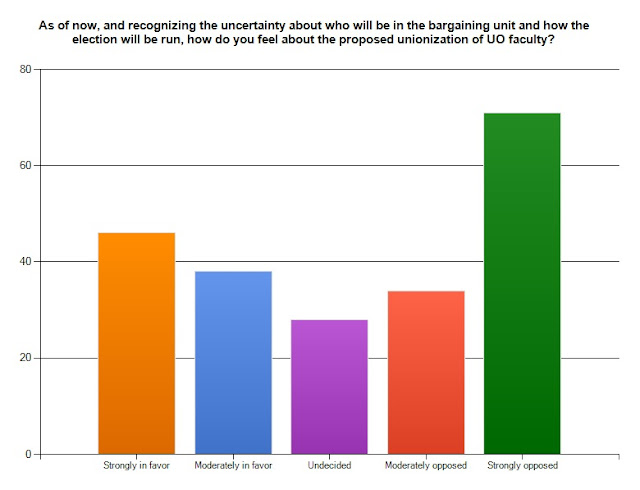 and out of 170 responses, multiple categories OK: 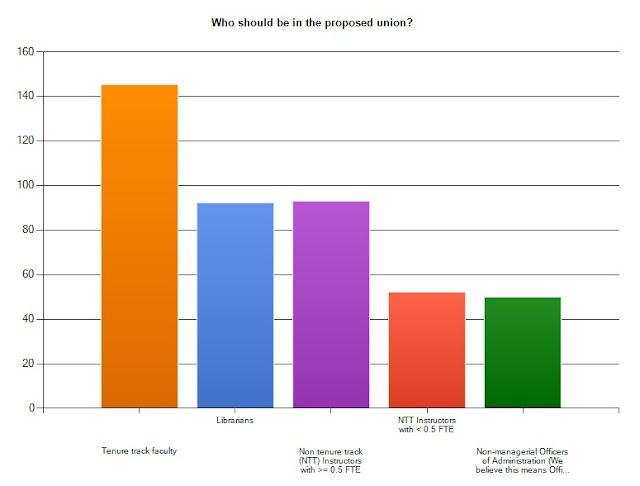 11/29/2009: We’ve written before about UO Senate efforts to increase transparency by providing a way for faculty to see how the UO spends money. These efforts were motivated by general tendency of the administration to hide spending info from the faculty, and more particularly by claims by Provost Bean that UO’s admin expenses were 38% of our peers, that we were making money on the Bend programs, and by a OUS audit that found former Provost Moseley was improperly using expense money for personal travel. The motion (which passed easily, after someone said “You are asking us to take furloughs. We deserve to know how you are spending our money.”) stated:

Frances Dyke’s office has now put up a reporting system, which any faculty member can use from their Duckweb account, under the faculty menu. However, it is crippleware. You cannot track individual university expenditures, as the motion calls for and as the OSU system easily allows. The closest you can get is annual summaries of expenses and sources, at a very aggregated level. In addition to not being transparent, this is not very useful – for example you can’t use it to check your grant or ASA balances.

The FAC is meeting this week to discuss this issue. There’s no reason UO can’t do what OSU did more than a year ago now –  unless there is something to hide?

“He was just an average-looking fellow — it’s not like he was Kobe Bryant or anything,” she said, fluttering her eyelashes. “But when he opened his mouth he was like Charlton Heston playing Moses.”

Hint: Some people said they were both troublemakers.

11/20/2009: We are taking a break. Posts will be light to none until after T-day. Meanwhile comments are open to the right.

This summer OUS paid Dave Frohnmayer $30K plus expenses to prepare his report, “The Coming Crisis in College Completion: Oregon’s Challenge and a Proposal for First Steps”. Dave’s contract called for a report about enrollment and retention, but it ended up being about a new funding model for OUS schools.

The first 33 pages are a formulaic rehash of ideas and analysis about enrollments, demographics, and educational productivity cribbed from the usual academic papers and reports. We’ve all seen this many times. Dave’s usual style is a combination of pomposity and vacuity that is hard to miss, but we did run it through UO’s plagiarism detection software just in case – only a few hits. He’s more than a bit confused about the upward bias in the investment return estimate caused by unobserved heterogeneity, omitted variables, and selection effects – not that I’m an econometrician – but it’s still a reasonable effort for an undergrad research paper, and solid B work.

The substance starts at page 34, where he proposes incorporating the OUS schools as public corporations, like OHSU. He says that the articles of incorporation should exempt the institution from having to comply with large parts of Oregon law. Yes, that Public Records law sure can be inconvenient when you are using state money to pay off your buddies. And check out footnote 2:

… I am deeply grateful for the legal insights of former Deputy Attorney General Peter Shepherd and his present colleagues at Harrang, Long, Gary and Rudnick, who have special expertise dealing with the legal status of independent public corporations. …

If the legislature goes along with this plan, what do you think the chances are that Harrang, Long, etc. and their new “of Counsel” Dave Frohnmayer will get the contract for legal services to establish the corporation? Boy does this state need some new blood. And if you think I’m a cynic, check out Lewis and Clark Law Professor Jack Bogdanski’s post. He apparently has some familiarity with the reality of OHSU’s administrative structure. Not entirely promising, it seems:

We interrupt the relentless flow of stories of the financial disaster at OHSU with a flash from Dave Frohnmayer: He thinks the murky, semi-autonomous, nonaccountable “governance” model on Pill Hill is so wonderful that it ought to be extended to the state’s other big universities.

And of course, the Scone, a Goldschmidt man from way back, thinks it’s a wonderful idea.

Just think: Maybe the U of O will soon be opening a research campus in Florida.

And this just in from Greg Bolt in the RG, POTUO Lariviere shoots down Frohnmayer:

UO President Richard Lariviere echoed that concern. He called many of Frohnmayer’s proposals “music to my ears” but said the university community has to be given an opportunity to discuss and debate the plan before deciding whether to support it.

“Many of his suggestions are extremely insightful and helpful,” Lariviere said. “But we’re not ready here at the University of Oregon to engage the Legislature on these issues simply because we have a great deal more consulting on this campus that we have to engage in.”