8/4/2009: Fox news has a segment on the lack of political diversity among the faculty at UO: http://www.youtube.com/watch?v=3L8TEiQQ1dY It’s apparently based on journalism student Dan Lawton‘s piece in the Christian Science Monitor. Dan reports that only a handful of UO faculty are registered Republicans, and argues the University should work to hire professors with more diverse political views. Be sure and check out Provost Bean’s spirited defense of UO’s intellectual diversity, 30 seconds in. 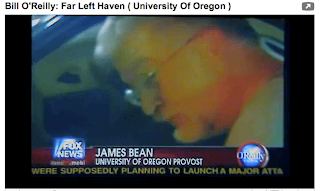 As always, Bill O’Reilly’s reporting is based on a careful analysis of the empirical data coupled with a thoughtful discussion of the larger issues and their implications for the survival of western civilization. Except the part where he describes being a professor at UO as a “plush job”. Actually, UO faculty salaries are the lowest in the AAU. It’s the UO administrators that drive the beemers. Thanks to a reader for the link.