no bid contracts and the Arena 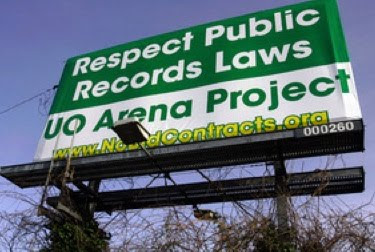 I’d wondered what the story on that billboard on Franklin Blvd was. When someone rents a billboard to complain UO is not following the public records law it kind of gets your attention. The Director of the union group that erected it says of UO:

“The amount of time that it’s taken to get a public records request processed is far longer than we are used to dealing with,” Bonham said. “For this institution to be not completely transparent and forthcoming is a concern for the public.” The University general counsel’s office, which handles public records requests for the University, did not return calls seeking comment.

For the record, The UO official in charge of public record requests is Doug Park, dougpark@uoregon.edu, (541) 346-3082. Doug doesn’t sign his name to public records responses, and likes to use the email address gcounsel@uoregon.edu instead of his real one. I’m not sure if this is because he is embarrassed by what his boss Melinda Grier makes him do for a living, or is just trying to forestall an ethics investigation over the details.

I still remember the efforts to get a copy of this report on the arena revenue forecast from UO. Melinda Grier was trying to hide this report because its revenue forecasts were 1/3 of the 15 million needed to justify tax-exempt bonds. She and Doug Park stalled for months, ignored repeated emails and calls, and the Oregon DOJ played along with her efforts to keep this report secret. Finally it came out and we found this: 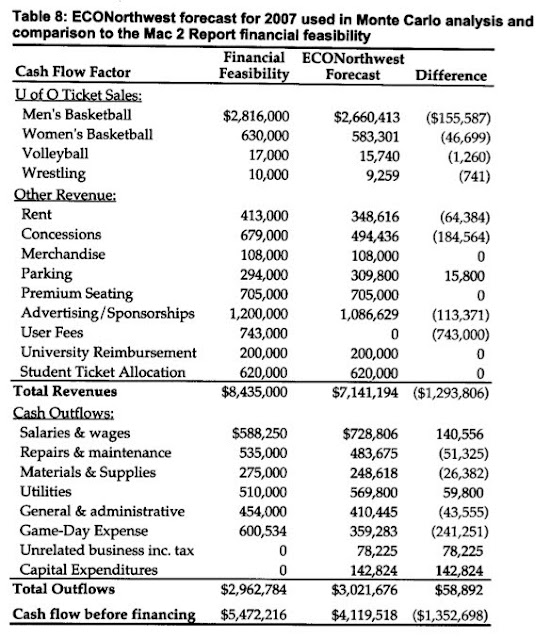 So the projection is for $4 million in net revenue, for $15 million per year bond repayments. When the State Treasurer’s office finally saw this report they refused to allow UO to sell the bonds as tax-exempt, because these numbers mean the IRS could have argued this was tax arbitrage, and imposed millions in penalties on UO. I wonder what Melinda is hiding this time?