4/22/2010: From Jeff Manning at the Oregonian. Obviously Lariviere has some guts and he is now taking charge:

Melinda Grier, the attorney at the center of a controversy surrounding the University of Oregon athletic department, appears to be on her way out.

University President Richard Lariviere and Oregon Attorney General John Kroger have reached out to a handful of potential replacements as UO’s general counsel in recent days. Officially, the university’s general counsel is part of Kroger’s staff….

Grier, who did not return a message seeking comment, has come to personify the culture of secrecy that has developed at the university, particularly with regard to its athletic department. Grier repeatedly rejected or sat on requests from the media for additional financial details about Bellotti’s contract and a number of other high-profile athletic department issues.  ….

Neither Lariviere nor Kroger would comment, but four sources confirmed that the university president is searching for a successor. Paul Kelly Jr., a Portland attorney and president of the State Board of Higher Education, said he learned Wednesday that Lariviere had made the decision. The other sources asked to remain anonymous. …

Kent Robinson, long-time federal prosecutor in Portland, has emerged as one candidate to replace Grier. Robinson is a respected veteran prosecutor who for years has worked in a senior role at the U.S. attorney’s office. …

Fantastic news for UO. Melinda covered up for Dave Frohnmayer for years, and her office is piled high with documents on the sleaze. She is taking the fall for his decisions – because she never had the guts to say no to him. It will be interesting to see how much of it now comes to light.

Not so good for the tight circle of administrators she has been protecting. There will be a lot more turnover to come. Very good sign that Lariviere is apparently not considering either of Grier’s assistants, Doug Park or Randy Geller for the job. Ms Grier is the wife of Jerry Lidz, appointed Oregon Solicitor General by AG John Kroger. This decision must have been politically difficult for Lariviere.

UO Matters would like to claim some credit for this – we pursued ethics complaints against her with the state DOJ and the Oregon Bar – but the truth is she got fired because she embarrassed Lariviere in the newspapers, and the newspapers only cared because it was about sports. 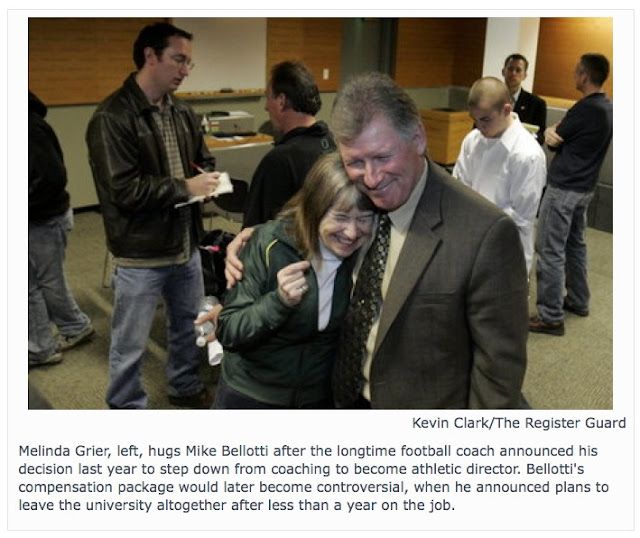