5/17/2010: President Larivere fired Melinda Grier almost 4 weeks ago. He didn’t let her resign or give her a golden parachute. He fired her and immediately took away her job responsibilities. This is almost unheard of. She had been Dave Frohnmayer’s General Counsel for 12 years, and Lariviere’s for 10 months. From Greg Bolt’s RG article:

Lariviere said the move is being made “without cause.” He declined to comment on whether the change is related to the dust-up surrounding former athletic director Mike Bellotti or complaints about the university’s handling of public records.

As the cover letter below notes, this summary was released publicly at the request of Lariviere. We have asked Kroger to also release the details of the report, and the documents collected during the DOJ investigation. We’ve been told is that the investigation took 321.8 hours and cost the DOJ $44,086.60, not counting the time for David Leith and Keith Dubanevich, the DOJ attorneys in charge. Obviously there was a lot of work that is not reflected in the 5 page summary. This should be public.

There are a lot of weird rumors flying around campus about why Grier was fired. Maybe the DOJ’s full report will give a definitive answer, maybe not. And maybe Kroger and Lariviere will decide we are just not worthy to know what really happened. 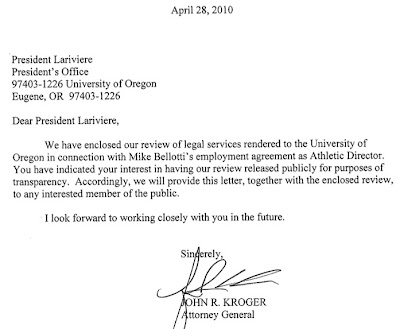