5/18/2010: Is tenure at UO for faculty or for administrators? The Academic Affairs website says:

Only faculty members with regular appointments at half-time or more (.50 full-time equivalent or FTE) at the ranks of instructor, senior instructor, assistant professor, associate professor, or professor can be considered for tenure.

We’ve now learned from official UO public records that Diversity Vice President Dr. Charles Martinez was given tenure in spring 2009, effective fall. He has held an 0.75 FTE officer of administration (OA) appointment since 2005. Going by the official records he did not have *any* appointment on the UO personnel list as instructor, senior instructor, assistant professor, associate professor, or professor at the time he was given tenure. Not even an “on leave” appointment. For that matter, given his 0.75 OA FTE, he could not have had the required 0.5 faculty FTE, even ignoring his 0.65 FTE off campus OSLC job. From what we can tell he last taught in 2005.

Look at the top of Dr. Martinez’s OA contract below, signed in 2009: It says Non-Tenure-Related and No Rank (emphasis added). Look at his other contracts, going back to 2005. Same. From what we can tell, Martinez’s last faculty appointment was in 2005, and it is not even clear if that appointment was tenure-track.

Academic Affairs VP Russ Tomlin and Provost Jim Bean have some more explaining to do. We have heard, however, that they have ditched their plan to promote him to full professor this spring, but only after some pressure. 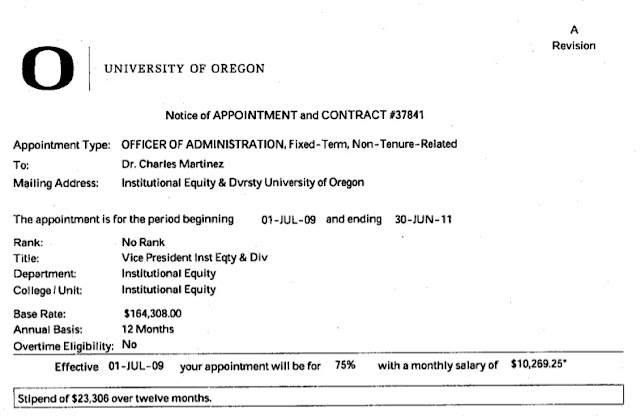