2/7/2011: The UO Foundation has refused to say much about their operations, to the point of hiring an attorney last year to get them an exclusion from the public records law. Nice try – I’m no economist, but I know a few things about finding data. No wonder they’ve been hiding these. Despite the surge in students, essentially all the growth in gifts to UO since 2000 has been for athletics: 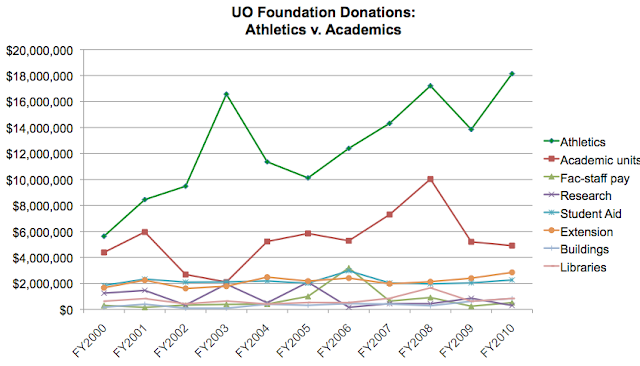 The figure shows the allocations of “restricted gifts” dedicated by the donors to particular purposes, with approval of UO. Data here. Deferred and capital gifts: e.g. the Lokey gifts for the Integrated Science Building and the Knight gifts for the Jock Box and Matt Court Arena, are excluded, because the Foundation refuses to report their allocation.

Given the trends you might think athletic director Rob Mullens would be willing allow some modest reform, like counting donations to the academic side when allocating season tickets, instead of just Duck Athletic Fund donations. Or you might think Frances Dyke would stop using student faculty and staff fees to subsidize the Arena garage. Or you might think Provost Bean would agree that the athletic department could pay the $2 million a year for the Jock Box and its athlete-only tutoring, instead of taking it out of the general student tuition and state payments fund.

You might think that, but you would be wrong.