Frohnmayer for the defense

3/19/2011: Update: Dave’s got yet another job, this one involving a public records scandal. He’s experienced, that’s for sure. From Ted Taylor at KTVZ in Bend:

To advise them on the grand jury investigation, the county has hired two attorneys, including former University of Oregon president and former state attorney general Dave Frohnmayer, at the rate of $550 an hour.

Here’s his contract with Deschutes county. Dave, you rascal – and you’ve been telling everyone you’ve been teaching! The word is that Barbara West covers his UO classes for him – gratis – while he is working on these cases. Dr. West is a Jungian psychologist who has been Mr. Frohnmayer’s special counselor for many years.

3/12/2011: Former UO President Dave Frohnmayer seems to be carving out a niche as the go-to defense attorney for Oregon officials who are being investigated by the DOJ for corruption and misconduct. First Mark Long, now Dean Gushwa? Lane County politico Jack Roberts takes Frohnmayer’s side in the Long case, with an attack on AG John Kroger in the Oregonian. Today Kroger replies:

Citing a recent article in The Oregonian, Roberts questions the conduct of one of my attorneys during an investigation of the Oregon Department of Energy. The article was based on leaked information. This is a common defense tactic in white-collar cases. Often, targets or defense lawyers attempt to discredit government investigations in an effort to deflect attention. The criminal investigation is closed, but I cannot comment on the allegations until an ongoing personnel review is completed and the whole record is before the public.

The leaked information Kroger is talking about includes this letter by Frohnmayer and Bill Gary, who are presumably the leakers. I’m not sure Frohnmayer’s new specialty defending against charges of misconduct and corruption is an example of $490,000 in irony, or of comparative advantage and learning by doing.

When he retired Frohnmayer negotiated with OUS Chancellor George Pernsteiner for a full-time UO paid sabbatical, and then used the time to restart his legal career – courtesy of UO students’ tuition dollars. He’s still on the UO payroll for $100K a year, co-teaching “Topics in Advanced Leadership”. From the syllabus:

… We will, as well, investigate how theoretical concepts about personality, training, character, and environment help us explain the principled or unprincipled exercise of power and influence.

No shit. Who knows, maybe his old boss George Pernsteiner will be his next client. 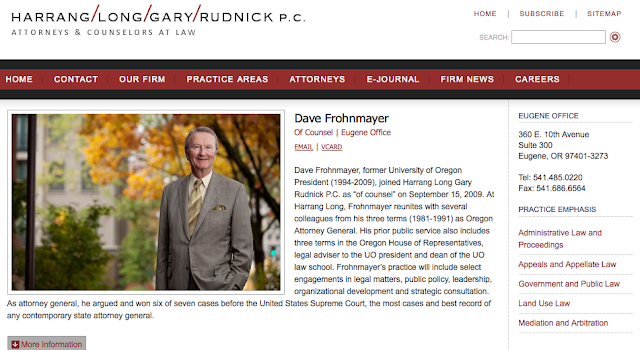