10/24/2011: A bit more on the $2000 raise proposed for NCAA athletes, in the NYT story here: Personally, I can’t decide which quote is more offensive – Mark Emmert, who is probably pulling down $1.5 million as NCAA President, saying

“I’ve heard a lot of people say, ‘Well, you want to do this $2,000 cost-of-attendance thing to reduce the probability of students breaking rules,’ and that’s nonsense,” Emmert told the Knight Commission on Intercollegiate Athletics during a three-hour meeting at the Ritz-Carlton. “People break rules because they break rules.”

or Thomas Ross, President of UNC:

“Ross said he was concerned about how students might spend the $2,000. He suggested providing it on a debit card that allowed universities to see the receipts.”

Think of how many millions a star football player brings in for his university – and he doesn’t want to give them $2000 of it? He thinks he owns the players. And so long as the NCAA and Emmert can maintain the hiring cartel, he does. Here’s some old IRS data on what the NCAA owners get:

And here’s some on Oregon: 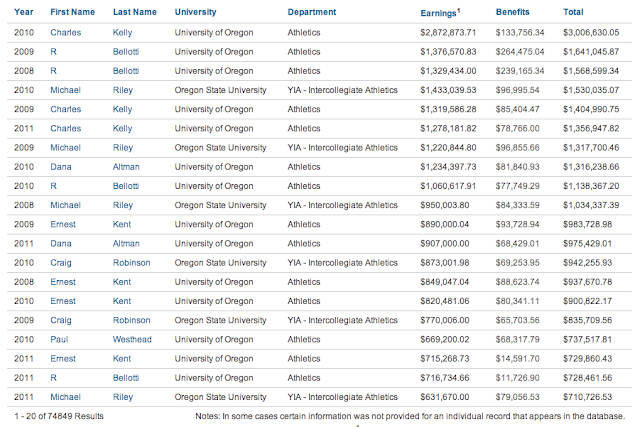 2 Responses to New lows in paternalism: