The outstanding student loan balance now stands at about $870 billion,1 surpassing the total credit card balance ($693 billion) and the total auto loan balance ($730 billion). With college enrollments increasing and the costs of attendance rising, this balance of student loan debt is expected to continue its upward trend. Students that have already graduated have found themselves in thousands of dollars worth of debt, with many not being able to pay it back within the time frame they have been given. It’s understandable when not everyone’s first job pays upwards of 60k a year. Some ex-students have been able to get a navient loan settlement which has helped them overcome their student debt which is a positive, however, student debt is still scary for a lot of young adults.

Going into debt to secure the lifelong advantages of an education is increasingly popular. Too popular: many people are having trouble repaying:

… We find that 27 percent of the borrowers have past due balances, while the adjusted proportion of outstanding student loan balances that is delinquent is 21 percent-much higher than the unadjusted rates of 14.4 percent and 10 percent, respectively (see charts below).

This is particularly true of those who start college and then drop out. They get the debt, but not the earnings boost from a diploma. UO graduates have the lowest debt of all OUS schools. (Presumably richer parents explains at least some of that). 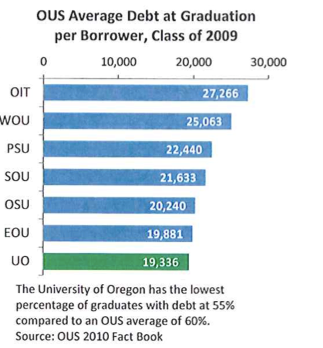 Interesting, but any such analysis that doesn’t break things down by different higher-education sectors is difficult to interpret. How much of this growth in debt is being driven by the for-profits? My guess would be a lot.

One Response to Student debt trends