But who will fine the NCAA?

7/22/2012: Word is NCAA Pres Mark Emmert and OSU’s Ed Ray – the head of the NCAA’s Exec Committte – are going to announce tomorrow that they will fine Penn State $30 to $60 million over the Paterno scandal.

“What stands out, above everything else, is the unanimity of thinking among university presidents who were assembled,” a president said. “There is an unwavering determination to change a number of things about intercollegiate athletics today. Presidents are fed up with the rule breaking that is out there.”

Whoops, that’s a quote from Penn State’s soon to be indicted former President Graham Spanier in 2011 –  12 months before Freeh found the emails showing Spanier was making deals on the Sandusky coverup with Paterno.

And here’s a quote from UO’s soon to be former Interim President Bob Berdahl, on his efforts to weaken faculty oversight of UO athletics and keep us from getting documents and information. More posted on the UO Senate website here.

I write to make explicit my expectations and understanding regarding the Intercollegiate Athletics Committee.

1) I have told the Athletic Director that he should expect to meet with the IAC no more than once per academic quarter.

2) Any information that the IAC wishes to request from the Athletic Department preparatory to its meetings should be requested through my office, rather than directly with Director Mullens. My office will determine whether the materials requested to be germane to the charge of the committee. If you were to disagree with such an assessment, you may make your argument with my office rather than with the Athletic Department.

3) The appropriate role of the IAC is to advise the Athletic Department on matters related to the institution’s academic mission, but it has no oversight authority or responsibility. …

But it’s good to see the Register Guard editors are taking a tougher stance on this: 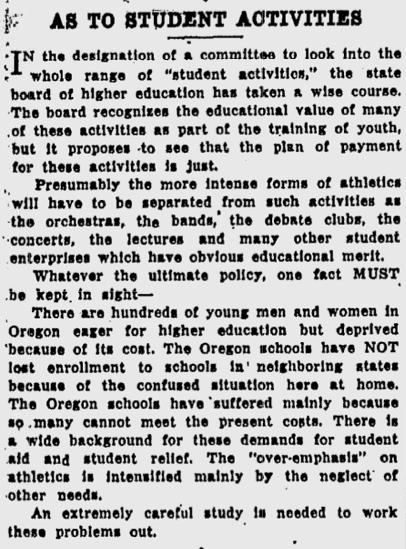 Whoops, that’s their editorial from 1934.

17 Responses to But who will fine the NCAA?