Update: Why was the RBI contract for $25,000? Because Oregon administrative rules require public notice for contracts of $25,000.01 or more. Sneaky.

Update: Diane Dietz has the story in the RG. AP version here. VP Holmes spent $25,000 of student union money for the consultants report below, and was apparently planning on blowing another $30,000 on swag and propaganda. Ian Campbell in the ODE has this quote:

“The EMU Renovation Task Force Team asked the EMU staff if there was any possibility for there to be some help as they looked at the ways to put out the educational messages and the facts about the project and the best way to address that. The EMU staff contracted with a marketing team, they did not use student fees for this fee, they used auxiliary funds out of the reserve account that they had. We are currently taking a look at that contract and are potentially rethinking if we will be using that service or not at this time,” Holmes said.

“Potentially rethinking”? “Educational messages”? “Not an effort to fool students”? Bullshit. Come on ODE – just email [email protected] and make a public records request for the BANNER records, contracts, invoices, and emails between RBI and EMU task force members and UO employees. If you don’t make it clear that you will verify what administrators say when you interview them, they will keep lying to you.

Update: The EMU board – which presumably approved this use of funds – is supposed to have 3 faculty members, appointed by the UO president. The current board is listed here. 2 of the 3 “faculty” members are actually administrators – one for DPS, one for the Recreation Center.

Word in the comments is that OUS today passed the request for bonds, conditional on a positive election outcome, and that student union money was indeed used to pay the consultant and to hire at least ASUO student senator to work on the campaign.

8/17/2012: This is for $90 million in funding to renovate and expand the EMU student union building. The OUS finance subcommittee votes on the approval for bonds Friday 8/17, docket here. They are doing this in the summer to minimize student input – it almost worked, see below.

The UO students have voted against this several times, a fact which is conveniently not mentioned in the proposal to OUS. Costs have increased from $300 per student per year to $351 (note: part of this is for the associated rec center expansion, see the docket for details). Payment starts 2 years before construction finishes. Final OUS approval will be conditional on a positive vote from the students this fall, which new ASUO Pres Laura Hinman believes she can deliver. To put this in perspective, these fees will be about 4x what the students currently pay in subsidies for the athlete only Jock Box tutoring.

Now it turns out that VP for Student Affairs Robin Holmes (Update: and/or the EMU directors) are using $30K in student money to convince the students to vote to tax themselves for this project. I don’t see any other explanation for the documents below – unless the UO Foundation is footing the bill. Full report from the RBI election consulting firm is here, their estimated cost spreadsheet is here.

This is amazingly manipulative – and is it really legal to make people pay the costs of a campaign to convince them to vote yes on a bond initiative? My understanding is that a school board, for example, would be in serious trouble for something like this. Unfortunately UO general counsel Randy Geller’s new legal policy prevents student government from obtaining competent independent legal advice – they have to rely on UO’s general counsel Randy Geller. 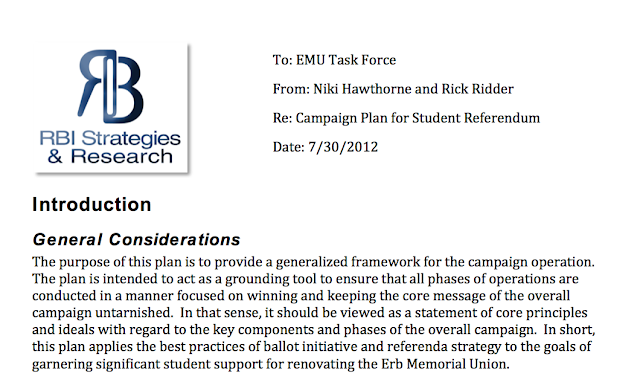 The politically active and engaged Lamar Wise and other ASUO Senators are going to bring their objections to the project – and more importantly I think their evidence of manipulation – to the OUS meeting on 8/17/2012. Their full testimony is here. Excerpt: