The reference to October 31, 2010 data in footnote 8 is in error.  I will work with staff to make the necessary correction, and arrange for the copy posted on our webpage to be corrected.  Thanks for bringing this error to my attention.

9/19/2012 update: As a commenter points out, Randy Geller just got Mike Gottfredson to sign a backdated federal document. I’m no law professor, but I’m told that can be a pretty big deal.

Maybe Gottfredson did this knowingly, figuring it’s a harmless coverup. Or maybe Geller was less than complete in briefing Gottfredson on the long history of this backdating, the OFCCP agent’s statement that this was fraud, and UO’s promises to the OFCCP investigators to stop, and the news stories. He just sent it over for a signature, thinking that by the time Gottfredson figured it all out, he’d be in so deep he’d be part of the JH coverup instead of the cleanup. I guess will find out someday.

9/18/2012 update: On Friday UO posted its 2012-13 Affirmative Action Plan, some 11 weeks late. Frohnmayer used to backdate these plans – once by some 16 months – to make it appear that UO was in compliance with the federal requirement for annual updates. Gottfredson has now done the same. UO promised the OFCCP they would stop doing this several years ago. From an October 2008 ODE story by reporter Jessie Higgins:

She [Penny Daugherty] acknowledged that the phrase, “effective date” is misleading, and that future plans will use an alternate wording. “(This) will eliminate what I can only assume is genuine confusion,” Daugherty said. She added that although the University is required to create a new Affirmative Action Plan annually, there is not a specific date it must be completed.

But a former official in the U.S. Department of Labor’s Office of Federal Contract Compliance Program said that is simply not true.

“The plan is suppose to be updated annually; it is a 12-month plan,” said Harold Busch, the former OFCCP Director of Program Operations. “That means (the contractor) needs to have a new plan in effect at that date. You can choose the date … but you must be consistent.” 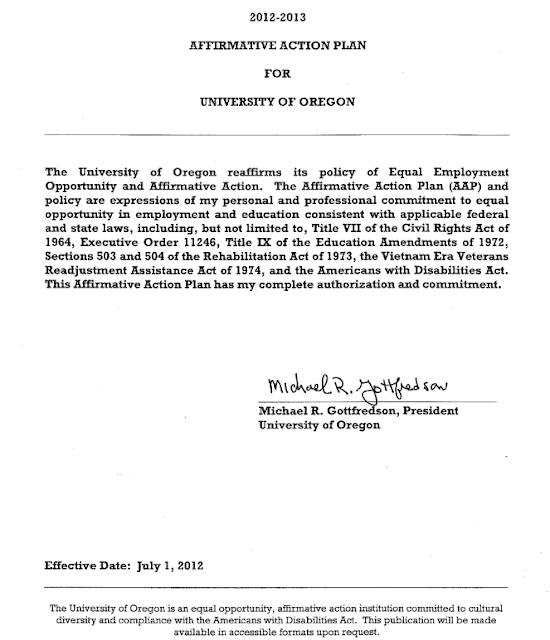 Preparation of the plan was a bit delayed.  However, it was submitted last week for administrative review and presidential approval.  I expect to have the updated 2012-13 Plan posted soon.

As usual, the job group with the most glaring minority under-representation is UO’s central administration. Hardly a shock, given their good-old-boy hiring strategy. And no one familiar with Penny Daugherty’s work will be surprised at a comparison of footnote 8 from this new plan with footnote 6 from last year’s plan. Yup, both plans are based on the same 2010 UO workforce data, now 2 years out of date. Or maybe that’s a typo. (That’s what an email I just got from Daugherty claims.) Or maybe the whole damn plan is a typo. Either way, I’m sure you’re as shocked as me to see that the competent legal review by Randy Geller’s office, which apparently held up approval of this Plan for 8 weeks or so, missed this little problem. 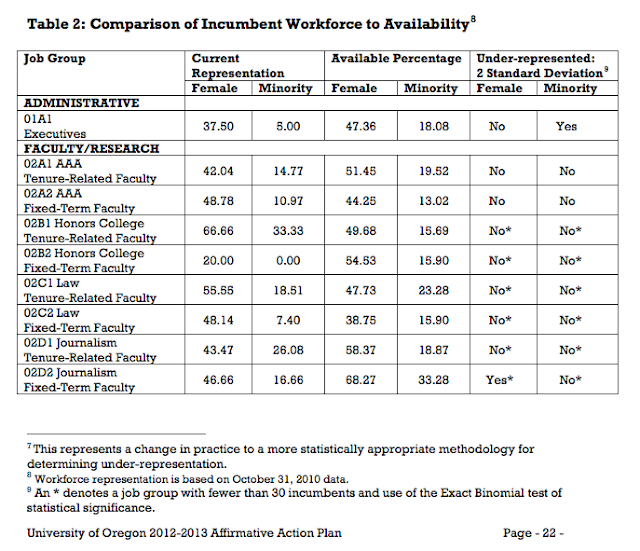 9/10/2012 update: Now 10 weeks late, and Randy’s not answering questions as to why. UO can’t bother to comply with basic federal affirmative action law, but our administrators have plenty of time to compile 5 year “Diversity Action Plans” and plenty of money for the UMRP and to hire consultants to train “diversity search advocates” to sit on faculty hiring committees.