10/29/2012: The University of Iowa Law School was sued in 2009 for failing to hire a conservative instructor. The ruling just came out, and is described by Peter Schmidt in the Chronicle:

In a case in which the University of Iowa College of Law stood accused of political bias for refusing to hire an instructor known for her conservative views, a jury found that the plaintiff, Teresa R. Wagner, did not suffer infringement of her First Amendment rights. The jury deadlocked, however, over a second claim, that Ms. Wagner was denied her equal-protection rights under the 14th Amendment. …

Back in 2006 I matched the Lane County voter registration file to a list of UO professors. Out of 506 matches, there were 25 registered Republicans. Comparing the matched results to the county and state: 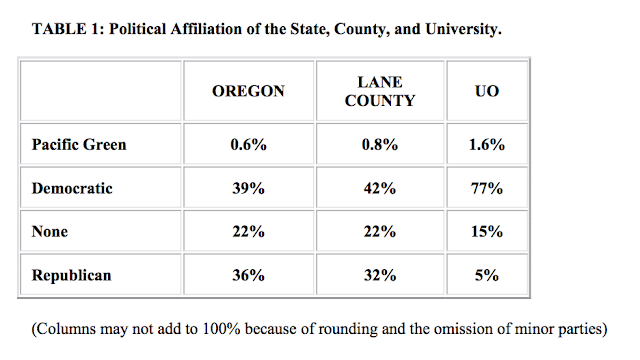 3 Responses to Political diversity at UO