11/26/2012 update: Geller is still redacting the contracts and invoices on legal advice about the union – it’s been more than a month now since I asked for them. But Dave Hubin did send me a copy of the emails between him and Geller on the subject of UO’s fee-waiver denial. That’s right, UO is redacting Geller’s advice to Dave Hubin about granting fee waivers. Batshit crazy: 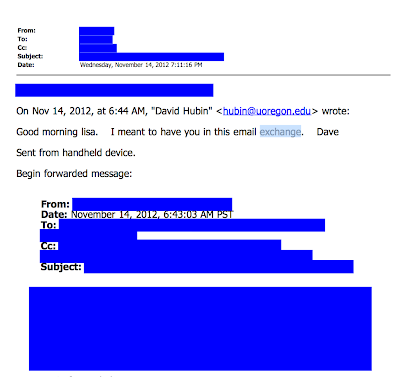 11/16/2012: We got 16 donations for a total of $180. I converted the bottle of scotch to its dollar equivalent and put us over the top. That hurt, but these public records will be public. Randy Geller is now going through Rudnick’s invoices with his magic marker – remember Randy, there’s a law about what you can’t redact, so keep a steady hand and when in doubt consult your GC Emerita.

I want to know why a simple request like this took so long. So I made another request:

I ask for a fee waiver on the grounds of public interest. The public has an interest in how UO follows the public records law. The DOJ argues that 2 weeks is normally a reasonable time to fill a public records request. This was a simple public records request of the sort other public agencies typically fill within days, and which in the past UO has – sometimes – filled promptly. It’s now more than 3 weeks and it still has not been filled.

This round’s on me, but the chipin is still open, any additional donations go to refill the liquor cabinet.

I am asking for any contracts or invoices for legal advice or consulting, legal or otherwise, relating to the faculty union, from 3/20/2012 to the present.

Yesterday, after a petition to DA Alex Gardner, I got back this:

The University of Oregon has received your public records request “any contracts or invoices for legal advice or consulting, legal or otherwise, relating to the faculty union, from 3/20/2012 to the present” on 10/24/2012, attached. The office has at least some documents responsive to your request.  By this email, the office is providing you with an estimate to respond to your requests.

The office estimates the actual cost of responding to your request to be $235.88. Upon receipt of a check made payable to the University of Oregon for that amount, the office will proceed to locate, copy, and provide the records you have requested that are not exempt from disclosure.  …