Rob Mullens on "the industry", plus concussion contest! 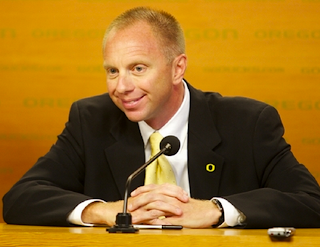 1/18/13. Rob Moseley of the RG extracts a little too much honesty from UO’s well incentivized Athletic Director Rob Mullens, talking about the search for a new football coach:

“I think we do things the right way here; I think most people in the industry absolutely understand that,” Mullens said. “I just have confidence that, industry wide, people know what’s going on here, and people are doing it the right way.”

Uh, you’re supposed to take your $500K and pretend this is all about academics and amateurs, Rob.

Then there’s this quick contest. A free UO Matters coffee cup to the first winner, and apologies to Joe Moseley of “Around the O”, from whom I stole the idea:

4 Responses to Rob Mullens on "the industry", plus concussion contest!