Postscript: (Raises to get to comparators here, what to cut here, Moffitt’s secret budget slides here.)

Our comprehensive proposal incorporates the University Administration’s proposal announced on March 4th. While we were encouraged that they agree with us that faculty need raises now, we are less pleased with both the relatively small size of their package and its incompleteness.

The University Administration has stated several times that there is no higher priority for them than raising faculty salaries. We agree, and so we proposed the following package as a shared first step toward rectifying years of stagnant salaries …

Cast: Union is caucusing. At 8:30, the admin’s start to drift in: VP for Online Grade Inflation Doug Blandy, Dean of Journalism and Secrecy Tim Gleason, and “Virginia Slim” Sharon Rudnick.

Disclaimer: This is my opinion of what people said, were thinking, wanted to say, or will regret that they didn’t say, “maybe not tomorrow, but soon, and for the rest of your life.” Nothing is a quote unless in quotes.

Art 20: Economic Proposals from union.
Rudnick: UO will *not* implement their plan for raises for faculty until a complete economic agreement is reached. They will give they raises only to OAs and non BU faculty members. The dollars will stay in the bank though, and the university will not backtrack on that part of the proposal. They just won’t implement it. Huh? What’s the point of Gottfredson agreeing he will pay out the money and then not paying it out?

Mauer: Lets see where we are after today. Rudnick: OK. Mauer: We have followup questions from the Moffitt presentation. Want to understand the financing …

50 faculty and a dog file in to bargaining room. Tight fit.

Mauer: We have a comprehensive counterproposal. Context: Bunsis showed how far UO salaries are below AAU peers.

Unfair, poor morale, retention problem, hiring problem in terms of money and faculty time needed to do the searches. Problem has gotten worse over the year, this is why union proposed a 3.5% increase in the fall. Gottfredson rejected it. We urge administration to implement retention and catchup raises – you haven’t.

You initially proposed today as the day to start economic bargaining. Then two weeks ago you came up with a partial proposal. We welcome this, we think the sensible thing to do is for us to put forward a comprehensive proposal – as you asked us to do. Our proposal balances speed and thoroughness.

5) Promotion: 10% raise for tenure and promotion rather than current 8%. 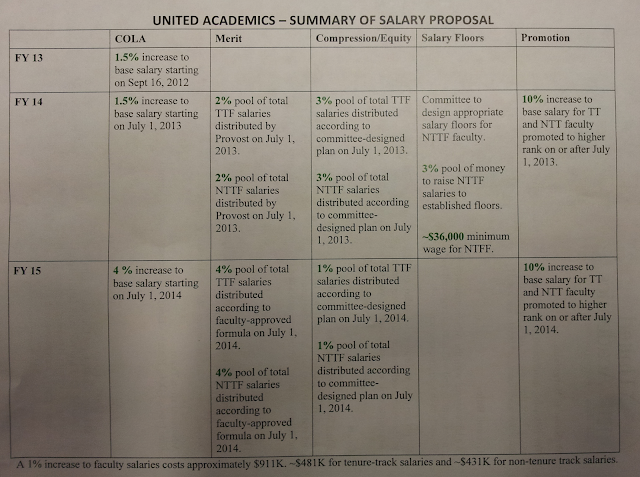 Mauer: We used your proposal as the base. ATB is retroactive to beginning of teaching. All in all we are asking for 7% ATB, cost of living is up 8.9%. For merit, equity we create two pools separated into NTTF and TTF to keep things fair. Generally accept your language for distributing merit for this year, just get it done, but we insist criteria look at work since the last merit raise – 2007? Shorter reach back would hurt people who published a work just before evaluation period. Floors: Pool of 3% of NTTF salary for floors with ~$18 an hour goal. Establish a joint admin/union “Salary Distribution Committee” to hash out details of policies and procedures. 3 union, 3 admins. Tasked with equity, floors. Policies would be transparent and published on the web.

Rudnick: What’s your cost estimate for the 4% ATB? Huh? She doesn’t know that? Hire an economist. Mauer: We’ve seen how you allocate your resources, you need to change your priorities, which are harming the university. Rudnick: Lecture on reserves. This would go over better if she wasn’t hiding the projections:

But no, she keeps lecturing us. Mauer: Yes, you need recurring income, you have it. (But you won’t show us the projections). Equitable salaries are an investment in UO’s quality. You need to make that commitment. Gleason: Where do you think the money comes from and goes? I’m puzzled by your assertion of a lack of commitment. What do you think deans and administrators do if not try to raise faculty salaries. (Look at all the other things UO spent money on.) Now Gleason is blaming salaries on the freezes. This problem has gone on for years, many years with no freezes, money got siphoned off for other things. Regardless, UO has plenty of money now, there’s no freeze – so now’s the time Tim!

Now Gleason is asking the union what they think should be cut! I’ve got a few ideas…

Now Rudnick is back on the freezes. This is bizarre. There is no freeze. They have money. Now’s the time. Green: Lariviere had a plan for raises and had a plan to pay for them. Now the freeze is gone. Implement his plan, get salary up to where it should be. You say we all want to do this, it will be good for UO, let’s do it!

Blandy: Claims something nonsensical about retention – we’ve retained everyone except the people who got big offers. WTF? That’s the point Doug. We lost two neuro people and an economist. Now Blandy tries to drive a wedge between students and faculty. Then he asks a good question: are these raises your top economic priority? Rudnick: You didn’t look at any other other comparators besides “aspirational comparators”. Mauer: What are your comparators for UO? Not the OUS AAU peers? (Won’t matter, we’re behind so far this wouldn’t get us close to those.) Cecil: Data comes from UO website, and these have been used for the Senate 2000, 2008 whitepapers, etc. Rudnick: OK. (But she’s trying to hint that it’s soon going to be time for the faculty to give up on that AAU business.)

Rudnick: We’re did you pull out that 4% merit number for 2015? Mauer: Attempt to reward best faculty. You got a problem with that? Rudnick: Floors: All NTTF but only NTTF? Cecil: Includes adjuncts. 3% is an estimate of the cost of a floor of about $36K, but we recognize variation may be needed, particularly for grant funded positions, worked out by SDC. Mauer: Agreement on the SDC would speed this process up. Rudnick: Where’s final authority for SDC? Cecil: In the committee, which must agree in order get the money out. Rudnick: OK. Where do the specific equity decisions get made? Mauer: Committee develops procedures, departments implement. Gleason: Does this committee replace the provost? Cecil: University could assign the Provost to the committee. Pratt: Since UO has committed to addressing equity, this is a way of rationally managing the details, consulting. Blandy nods, Gleason glares. Pratt: Different from merit because that’s in the departments.  Rudnick: So it’s a typical joint management/union committee. Sets out procedures, then does revisions, or is this a one off? Mauer: likely it will need to be around for life of contract. Rudnick: Q about floors – they are adjusted with raises, not an additional raise? Cecil: Yes.

Rudnick: We’ll see you this, and raise you another 2% for merit for 2014. Whoops, guess not. Rudnick: No, we’ll go back to Gottfredson and get you an answer Th. Meanwhile, just to be jerks, we’ll have Bean send out a memo saying the other raises will only go to people outside the bargaining unit. The issue for us is 2015. (So, again, explain why are you not giving the 2013 raises now?) Mauer: We look forward to Thursday, perhaps you should bring someone with some knowledge and authority to the table? Rudnick: We’ll let you know about that. We are worried about 2015, need to make sure the university has money for sports subsidies and central administration. but we won’t show you the data: 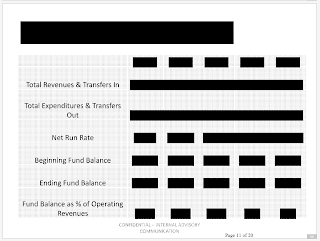 Rudnick: Despite the fact we won’t show the projections, we want *you* to show us where the money for these raises should come from. We pay Moffitt $270K to hide the data from you and run out of the room when you ask tough questions, so good luck with that, suckas. Your cost estimates sound about right though, at a max this will cost 2.5% of the total UO budget – good detective work!

Mauer: Sorry, isn’t it the administration’s job to prioritize? Rudnick: We don’t have the money in a checking account for the raises Lariviere proposed. It’s a zero-sum game and I don’t understand the budget. (Then she says the problem is 2015, suggesting she’s OK with the union’s 2014 numbers.) Cecil: How long will it take you to do your homework? You knew it was due today.

Rudnick: $12-13 million for our 2013 and 2014 proposal. (I don’t think so, looks like about $6 million, total, including the benefits.) Now she’s blathering. My only point is … Gleason jumps in with “burn rates”. Man’s got a buzz word for everything. Just stop, Tim. Green: You’re going to “burn through” a lot of good faculty! Gleason: Where should the money come from?

Gleason has been sitting here at the table for four months and he hasn’t started looking into this yet? A worthy replacement for interim Provost Bean, for sure.

Cecil: Will you give us budget info? Rudnick: I don’t know. I’ll have to ask Gottfredson how much he wants to hide. Gleason starts pounding the table. Now it’s *not* a question of reprioritizing, it’s a question of what not to fund! (Man’s got a strange understanding of the english language.) Raising faculty salaries has always been a priority – we lose too many faculty, we all know that. (Not Blandy, who just said we weren’t losing any good faculty). Rudnick: You tell us where the money should come from!

She’s trying to set this up to blame tuition increases on the faculty.

Psaki: The Senate whitepaper is now moth-eaten. We are going to look at what the administration does, not what it says. Bramhall: Remember the NTTF’s have never been evaluated, had no raises in years.

Mauer: So, we look forward to talking more Thursday. Release time request – partial release time for one person on the BT. Rudnick: I asked Gottfredson, he said no. Nothing has changed. I get $400 an hour, you get nothing. But I’ll charge another $400 to ask again.

Summer term proposal from admins. They didn’t bring handouts for the press, sorry.

Rudnick: Summer teaching is voluntary, no requirement or retaliation, cancellation can happen. Compensation is agreed upon between dean and faculty. Green: So no compensation for a cancelled summer class? Rudnick: Intent is to pay people for supervising grad students over summer, or at least not prohibit this. Cool. Except they want the students to pay summer tuition. (Note: this is exactly the sort of bureaucratization of our grad student teaching that the anti-union people warned about. Except this is an *administration* proposal. WTF?

The End. See you Thursday.