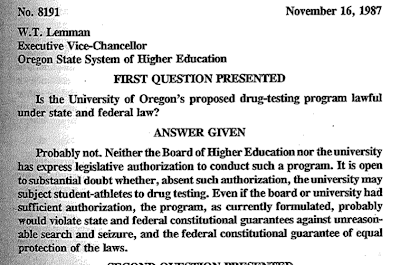 4/20/2013. New Oregon Administrative Rule 571-004 took effect March 4, 2013. It allows the Duck athletics department to randomly test “student-athletes” for use of illicit drugs, and take away their scholarships if they fail one test:

The program shall also describe potential sanctions for repeated use or abuse of substances for which tests are conducted. However, a student-athlete may be dismissed from the team and lose all athletic financial aid, beginning with the next academic term after a single positive test result.

This policy was pushed through by President Gottfredson this fall, at the instigation of Athletic Director Rob Mullens and with the help of UO General Counsel Randy Geller. But, in a stunning development, former UO President Frohnmayer has stated that random testing violates the 4th amendment prohibition on unreasonable search and seizure. The RG breaks the story: 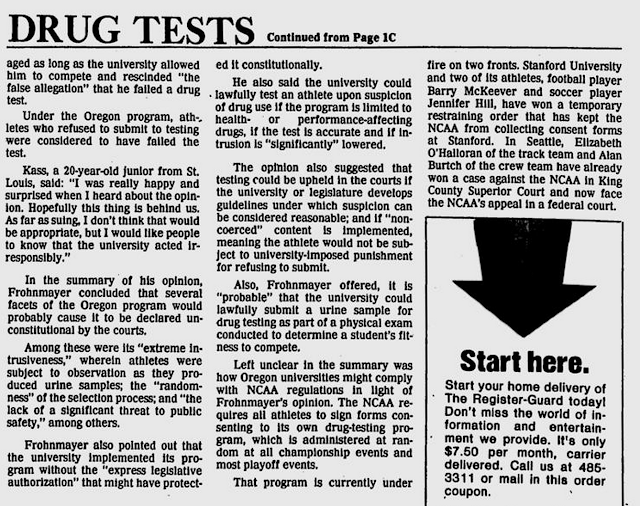 Wait, the RG story is from 1987, and is about the last time UO tried this. A runner and a wrestler fought back, and got the ACLU and then the Oregon DOJ on their side, and they won.

But that was then. UO’s new random drug testing OAR, with the clause giving the AD the right to cancel a scholarship is now in place, with no objections from Dave Frohnmayer, currently serving as a UO law professor.

How did UO’s General Counsel respond to the people who raised questions this time? He accused President Kyr and the IAC of defamation: