Latest Fact Check: HLGR’s fact checkers agree with UO Matters that their colleague Dave Frohnmayer was negotiating his fat golden parachute retirement deal with Pernsteiner, at the same time he was trying to convince the faculty to take 5% furlough pay cuts. My post here, Frohnmayer’s pissy email here, their fact check here – they misinterpret my statement about his pay and ignore the screen shot of his pay records, don’t explain how it is that he’s listed on the HLGR bargaining invoice but is supposedly not advising the admin bargaining team, and then let the furlough/parachute statement pass their fact-checking without comment.

Rudnick: Passes out summary of Moffitt’s revenue forecast for 13-14 and 14-15. Tries to use this to argue they can’t afford faculty raises. Bulk of it is a fall in grant funding, even though much of that has little to do with money available for faculty salaries. Fall in sports action lottery revenue that goes to the jocks anyway. Irrelevant. Sneaky attempt to confuse the faculty, Jamie. But we expect no less from you at this point.

Rudnick: Costing information for your last round of economic proposals. Always amusing to hear Rudnick stumble her way through a spreadsheet. “Um, line item so to speak … Um overall the proposal that you made came down about $2M.” “Needless to say we were very disappointed in you”. But we don’t even have counter proposals for you yet, we will wait to hear from OUS about tuition increases.

Mauer: We understand there is a limited amount of money and competing demands. We don’t accept your premise that faculty salaries depend on new revenue. Your thinking is that all other existing costs are immutable. We don’t accept that. We think the university has a large amount of money, needs to prioritize and budget. ($750M budget, we’re arguing about $12M.) We come to the table with an important set of priorities that need to be a priority. We are not here to take the leftovers. Whatever happens with tuition will determine the budget but it will not change the relevant priorities. It’s been 4 weeks now since we put our proposal on the table. They were reasonable (say 2% of the total budget?). Even if you accepted these, we would still be at or near the bottom of the AAU. (President Gottfredson’s pay is in the top 25% of his peers – first year in the job.)

We have many suggestions about where to cut. Your thinking is skewed. Faculty pay should not be at the bottom of UO’s priorities.

Rudnick: I reject your claim that priorities are wrong. You are ignoring the fiscal realities of this university. (Now she’s an expert on fiscal realities?) The people working on this are working hard to keep the university’s priorities secret from the faculty, that’s why President Gottfredson has set up a Budget Committee outside Senate purview. We cannot ignore the fiscal realities. Police, athletics, administrative pay, and my hefty feees all come first. That’s just the reality. We only have $63 million more in reserves than OSU does, and we cannot afford to pay you $20 million of that. We will have a counter proposal for you next session, but it’s going to be far from what you are asking.

Mauer: You should say “we are going to pay the faculty and then decide how much to spend” on fluff. So, the proposal on the table is funded and will not be withdrawn? You are saying that if there are tuition increases you will re-examine your office? Rudnick: Yes. Gleason: We will not come back with a smaller offer. Rudnick: Correct. OUS F&A committee will recommend tuition increases at their Friday meeting, they won’t be approved until June.

Mauer: So, why not bargain with us assuming you will get these increases, in the same way that you form the rest of your budget, and then come back to readjust if the increases don’t come through? Rudnick: Because your raises are the last priority of the administration. Mauer: It’s frustrating when you come to the table with no authority. Rudnick starts to flip out again: “We represent the University!” Where the hell did this outburst come from? Mauer: You come to the table and tell us this is the way it is because Bean says it is, then you won’t bring him to the table to talk to the faculty?

Rudnick, snidely, “Are you ready to get back to work?” Mauer: We are working, lets get back to the economics, then do new counters.

Mauer: You are claiming there’s no money, we want you to show more specific information to support that claim. Rudnick: Tell me what you want. Mauer: We want to see your projections for spending by administrative unit, so we can figure out why faculty salaries come last. I’ll get you specific questions in writing. On the general topic of tuition and faculty salaries, it’s a fact that there have been large increases in tuition revenue, but little change in faculty salaries. We need to understand this. Rudnick: Doesn’t understand the question, tries to blame this on the comments by the OUS Chancellor on tuition increases. Green: Let me explain the question again. Faculty see tuition go up, more students, no raises. So we don’t see an empirical correlation between tuition and salary. And yet now you are trying to assert one in order to argue against raises. You’re new here, so maybe you don’t get this. But explain yourself. (Perfect opportunity for Gleason or Blandy to jump in and embarrass themselves. Gleason gives it a shot, but Rudnick interrupts him. Come on Sharon, let Gleason run free, it’s part of the fun of this all.)

Rudnick: After years of no raises, some faculty did get raises! And we are proposing ones that will still leave you at the bottom of the AAU. And we’ve increased administrative hiring 20% over 5 years, and only 9% for TTF’s. You people are already taking to much of the pie. You may not like the fact that we don’t have economic proposals yet but we are building a budget and we will not let you see it! I’m going to lecture you some more about budgeting, and then accuse you of stalling. We are going to wait for Friday’s F&A meeting before we talk money anymore. Mauer: Our philosopher would like to explain some things.

Pratt: Were have you cut and were will you cut next. This is a chance for you to build some much needed credibility, Sharon. Rudnick interrupts. Gleason interrupts. He can’t make a sensible statement. Pratt: What else might be cut? Rudnick: Books, IT, … Pratt: Have you told units that cuts are coming? Blandy: Money was held centrally for raises. Whoops, he didn’t mean to say that. Pratt asks about enrollment advancement, etc. Their budgets are way up. Blandy: Don’t know about that. Davidson: Stop calling a 10% raise after 10 years for NTTF’s “generous” especially when the central administrators have seen regular raises to keep them at comparators. There’s no shared sacrifice, and so I don’t take it seriously when the president claims he represents the entire university. Rudnick: There’s no fat in the administration to cut. Goes on to lecture us … Pratt: I was asking where you would cut if tuition is not increased. Blandy reveals there’s a plan. Gleason: blah blah incoherent blah … He thinks he’s being clever… “These are the hydraulics” Gag me. Please Tim, do tell us more.

Here are some places to cut: 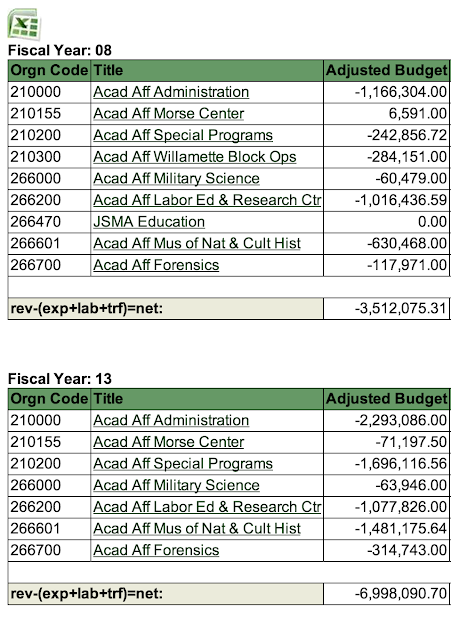 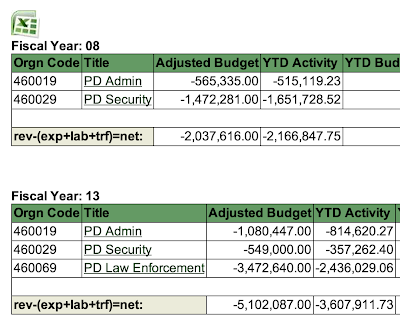 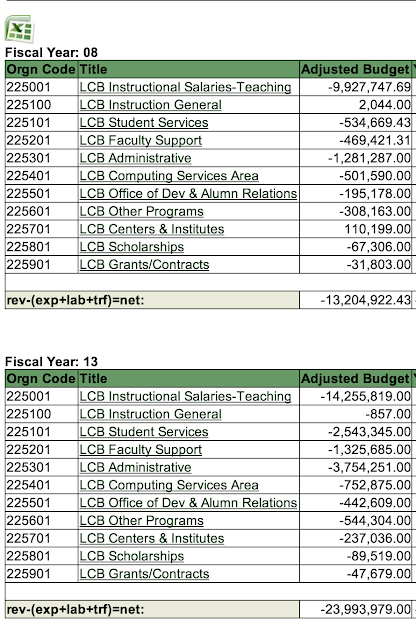 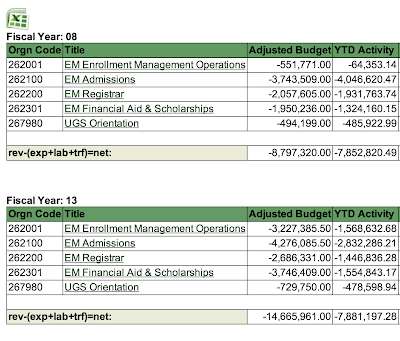 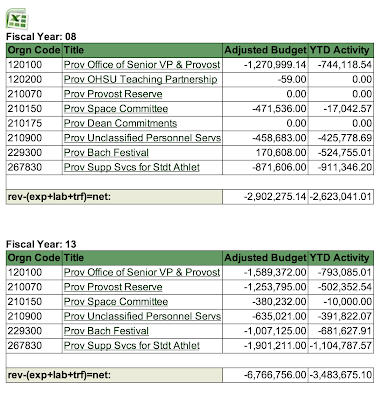 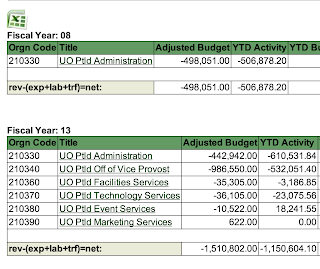 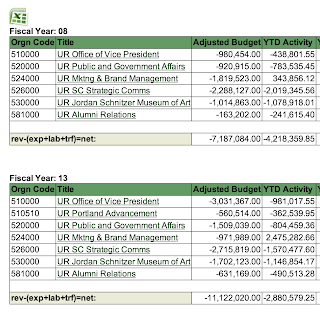 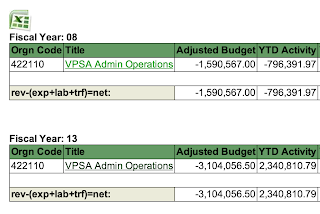 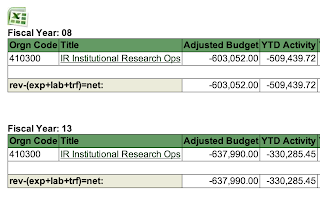 OK, back to bargaining:

Blandy: We need more money for administration – we can’t administer with our current budget. More important to increase administrative spending than hire more faculty, that’s why we’ve piled on 20% more admins and only 9% more faculty of the past 5 years. And these our still our priorities – we need to build up “The University” and that means more administrators.

Psaki: You need money? Look at the Senate resolution to cut athletic subsidies. It will bring in $2.5M in recurring funds for faculty by ending a few of the athletic subsidies, and another $1.8M for scholarships.

Green goes on about how out of touch Rudnick is. Anyone who’d been around campus would understand why the faculty knows it is not the top priority. Gleason: That’s not what I hear from my faculty (I can’t imagine why they don’t talk honestly with you, Tim.) Rudnick is insulted because the union called her last proposal ludicrous and insulting. She’s insulting me. She’s ludicrous. Then she goes into a long lecture about perceptions and cognitive psychology. Then she tells us we should stop talking economics and get on to counterproposals on other articles. Then she goes back to her talk about how it took years for Frohnmayer to get the faculty into this hole and it will take years of pain and suffering by you faculty peons before you are even close to being made whole. Then she gets onto the question of tornados. I’m not making this shit up.

We have $63 million more in reserves that OSU does, but we cannot pay the faculty an extra $12M because we are worried about a Tornado. Fire this woman now, President Gottfredson.

Mauer: Before we move on: You’ve said you are talking about a 10% raise by July 1 2014? Rudnick: Yes. Mauer: You understand that all the merit will not happen by then? Anyway, let’s move on.

Rudnick: Ethical conduct, Consulting and IP will be on Th, with Chuck Williams from RIGE.

Preamble: Admin counter.
Rudnick: We accept all your changes except you are still going to have to address us as “The University” because the senior administrators in Johnson Hall are just that petty and insecure. There will never be a contract that does not call them “The University”.

Art 2: Classification and rank. Admin counter.
Snoozer, lots of productive back and forth.

Art 16: Arbitration: Union counter.
Rudnick: Under what circumstances could an arbitrator award tenure? Mauer: They couldn’t. We agree about this last time.

Art 18: Discipline and Termination for cause. Union counter.
Gleason makes an ass of himself again over the definition of a phone call. Rudnick tries to smooth it over. “We’re very close on this article too.”