Update: Gottfredson’s compensation is ~10% above comparators

By uomatters | 07/27/2013 - 9:53 pm |07/27/2013 Uncategorized
7/27/2013 update: OUS has quietly shifted presidential pay from the UO Foundation to state funds and student tuition. Back in 2008, the OUS board approved the final year of Dave Frohnmayer’s presidential contract, with a substantial raise. Contract here. On top of $245,700 in state money and $50K for the “Knight Presidential Chair”, they agreed to let the Foundation pay him another $350K from donor funds. OUS tried to hide this, and then tried justify the raise by noting that the increase would come from donors, not taxpayers. Steve Duin of the Oregonian reported on some of their attempts. Frohnmayer’s 2008 pay:

In contrast President Gottfredson’s base pay of $540K (no chair) is all from OUS state and tuition funds (contract here):

PERS/ORP retirement, car, housing and expenses are on top of this course. Where will the UO Foundation spend the $350K they saved? The past is probably a good predictor: 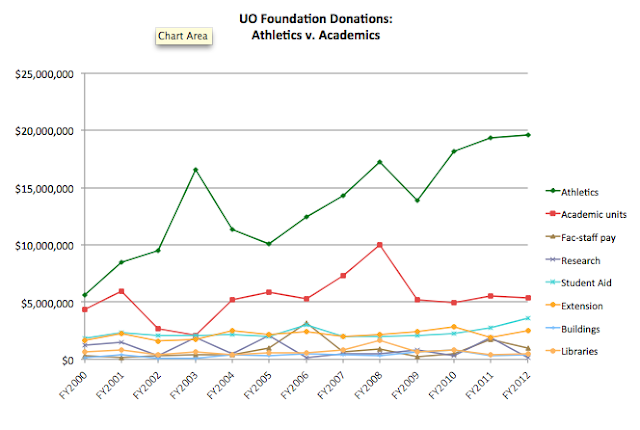 We all know UO faculty salaries are bad. Check here to see how far you are behind your peers. But the UO salary news isn’t grim for everyone. The Chronicle just reported salaries for 212 presidents and chancellors at public research universities, for 2011. The median total compensation (includes deferred) is $400,000. President Gottfredson’s contract is here. His starting pay was $440K, plus $100K deferred, plus ORP at about $63K, plus $14.4K for a car, plus use of McMorran house or Treetops, worth say $36K – below market, but he’s gotta use it for entertaining too. So, including ORP his total comp is about $653K. Leaving out the house and car, it’s $603K.

Average compensation at our AAU comparators is $612K. If you leave out IU and Michigan, where the presidents run entire systems, the average is $553K. Of course many of these other presidents have years of presidential experience. 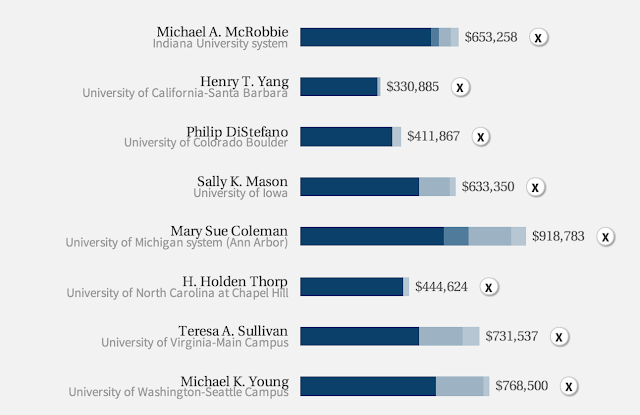 4 Responses to Update: Gottfredson’s compensation is ~10% above comparators