By uomatters | 08/06/2013 - 6:32 am |08/06/2013 Uncategorized
8/6/2013: It now takes months and hundreds of dollars to get public records from UO. OUS is quicker, but often no cheaper. Both adjust their pace to the politics. And apparently Gottfredson’s performance has now become a political issue for OUS.

I sent OUS a follow-up request for information about President Gottfredson’s performance review on Saturday. On Monday I got a call from their public records officer, Chuck Triplett, and he sent me this pdf showing the information they asked Gottfredson and the other OUS presidents to submit for their evaluations.

The meat – which Gottfredson and VPFA Jamie Moffitt have hidden from the faculty, while telling us and UO’s academic accreditors that they are being transparent about financial information, is in bold:

On February 15, 2013, the Governance and Policy Committee further clarified that OUS presidents should address the following topics in their annual Executive Session evaluation discussions with the Board:

1. Progress toward meeting Board goals and 40-40-20
2. Connections with other universities, K-12, and community colleges
3. Progress toward meeting the president’s goals for the year
4. Big issues on campus in the past year
5. Major achievements and critical challenges in the past year
6. Opportunities for the future and clouds on the horizon
7. Hopes and goals for the upcoming year
8. 5-yr financial forecast for the education and general fund complete with projected enrollment, tuition, cost, and fund balance

I’m still trying to find out if Gottfredson made any effort to solicit feedback from the UO community regarding his performance. Triplett says OUS has no record of that.

8/3/2013: OK, they won’t show us the results of President Gottfredson’s evaluation, but at least the questions are public records. Right?

On July 30th I made a public records request to you, asking for UO President Gottfredson’s 2013 self-evaluation and for the Chancellor’s evaluation of his performance. Thank you for the prompt response saying that your office would not release these, on the grounds that they are confidential faculty records. This is a follow-up to that request.
I am asking for public records that show:

a) Emails, letters, or other documents showing communications between your office and President Gottfredson or his staff, on whether or not OUS should release his self-evaluation or the Chancellor’s evaluation, in response to my 7/30 request.

b) Documents showing what information OUS asked President Gottfredson to provide for his self-evaluation, and what questions or issues he was asked to address.

c) Any emails, survey forms or other communications from OUS asking for input on President Gottfredson’s performance review.

For b) and c) I am not asking for responses, just for documents showing how OUS conducted their evaluation of President Gottfredson, such as what questions were asked and who was invited to participate.

I ask that these documents be redacted only to the minimal extent allowable by law. I request a fee waiver on the basis of public interest, in evidence of which I note that these sorts of documents are often made public by the President, e.g. the evaluation for the University of Kentucky President, at http://www.uky.edu/Trustees/agenda/full/2012/julyspecial/Presidential_Eval_final.pdf. I also note that information on faculty performance, e.g. student teaching reviews, is often made public at no charge.

8/1/2013: That was quick. Presumably this means they asked President Gottfredson if he wanted to make his evaluation public, and he said no. I’d email him myself, but he doesn’t answer emails. Maybe a reporter will ask next time he talks to the press. Oh, right, Gottfredson doesn’t talk to reporters either.

The Oregon University System, Office of the Chancellor is in receipt of your July 30, 2013 public records request for “…a copy of UO President’s Gottfredson’s 2013 self-evaluation and the OUS Chancellor’s written performance evaluation discussed in section 7 of his contract…”   The Oregon University System respectfully declines to provide any records pursuant to this request.  Evaluation materials, including self-evaluation
documents, are confidential faculty records under Oregon Administrative Rule Chapter 580, Division 22, section 60 through 125.  Faculty records as described under these administrative rules are not public records under law.  (See Oregon Revised Statute 351.065(12):  “Any category of personnel records specifically designated as confidential pursuant to valid rules or orders pursuant to this section is not a public record for the purposes of ORS 192.420.”)  The Chancellor’s Office treats the presidential personnel file, including evaluation documents, as confidential faculty records not subject to disclosure.

7/30/2013: His self evaluation was due June 1, and interim Chancellor Rose’s report is presumably complete by now. From his contract with OUS: 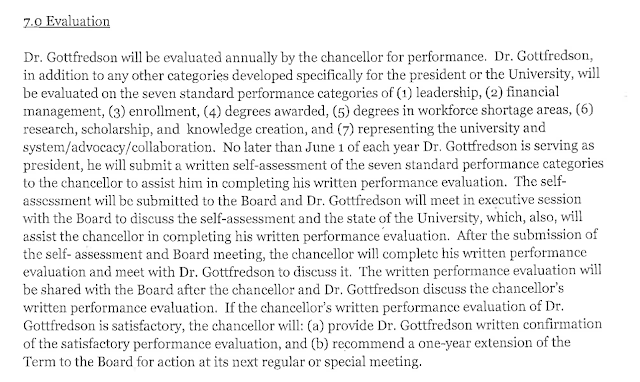 At many universities these are public as a matter of course. The first year evaluation for President Eli Capilouto at the University of Kentucky is a good example. 44 page report here:

I’m on the UO Senate, I don’t remember hearing a word about an evaluation for President Gottfredson. So let’s see what’s out there, with a public records request to OUS:

This is a public records request for a copy of UO President’s Gottfredson’s 2013 self-evaluation and the OUS Chancellor’s written performance evaluation discussed in section 7 of his contract, available here: https://dl.dropboxusercontent.com/u/971644/uomatters/Gottfredson/2012%20Gottfredson%20contract.pdf
I ask that these documents be redacted only to the minimal extent allowable by law. I request a fee waiver on the basis of public interest, in evidence of which I note that these sorts of documents are often made public by the President, e.g. the evaluation for the University of Kentucky President, at http://www.uky.edu/Trustees/agenda/full/2012/julyspecial/Presidential_Eval_final.pdf