The University of Oregon moved up in the rankings — jumping six rungs to No. 109 on the list of about 1,376 colleges nationally.

The company, which has been promised a $4.55 million property tax break by the city, has submitted new and more detailed plans that show a wealth of upscale amenities for the 139-foot-high building. They include a pool and hot tub on the roof and, on a lower story, a fitness and leisure complex that would feature another hot tub, golf simulator, billards room, piano room, steam room, two tanning rooms, a sauna, yoga room and lounge.

According to Zillow, rents in Eugene are well below the levels in our competitor college towns such as Boulder, Seattle, Phoenix, and LA. In contrast to those towns, the increase in the supply has kept rents level in Eugene, despite the increase in the number of students. The new construction coming on line this fall should lead to rent decreases – judging by the reports of unhappy local landlords.

Because parents look at these rankings and at total cost of attendance, this means that UO has plenty of room to continue out-of-state tuition increases, while staying competitive for students.

So expect another round of raises for UO central administrators, as soon as the faculty and SEIU sign their contracts. 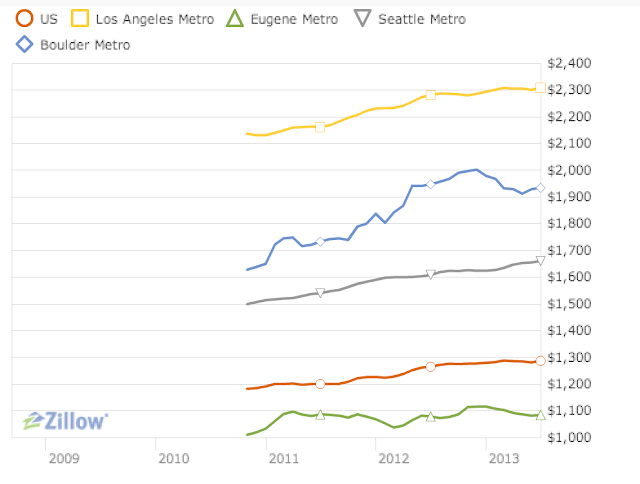