4/29/2010: Diversity Vice President Charles Martinez is paid $146,537 by UO for his 0.75 FTE appointment at UO. (The stipend is really just extra salary, paid from a fund that was set up to compensate faculty for administrative work. The administration has been using these instead as a device to boost their own pay). 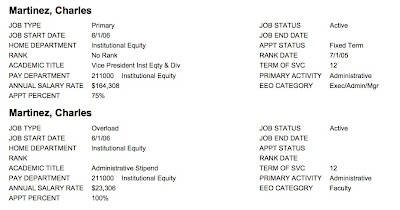 This would logically give Martinez 10 hours a week left over for outside work. But the IRS reports he actually works 25 hours off campus at OSLC:

The OSLC pay comes from federal grants, and if these were run through UO, Martinez would not be allowed to double dip like this. UO’s rules allow 1 day in 7 for outside work. Even adjusting for the 3/4 time appointment he’s way over. When he was hired by John Moseley in 2005, Moseley gave him a verbal promise the rule would not be enforced for him. Jim Bean apparently put that in writing last year. (Bean also put Martinez up for tenure, in a highly unusual last minute move, and then refused to show the faculty committee his letter explaining his decision.)

Given all this outside work – 25 hours a week – you might wonder how Martinez gets his job as UO Vice President done. He’s not on campus much. Try to set up a meeting, and he will want to meet at OSLC, or in a nearby coffee shop. He’s notorious for foisting all his duties off on his assistants.

Now Lariviere is letting him hire a new “Strategic Communications Specialist” to do more of his work for him. Amazing. Another $52,000-64,000 FTE, 0.5 time position.

At least they’re doing an affirmative action search. Now when are you going to do one for Martinez, President Lariviere? Are you sure the legal advice you got on his double-dipping and AA compliance – from Melinda Grier – was solid?

Have you found anyone on campus – other than Jim Bean and Charles Martinez – who thinks Charles Martinez is the best we can do as Vice President for Diversity? Regardless of what they think, shouldn’t we have an open, national, affirmative action compliant search for this position? Or at least a job description? Apparently Doug Park and Melinda Grier couldn’t find a written contract for Charles Martinez either:

The only public records we have been able to locate that are responsive to your request for documents “describing OIED VP Charles Martinez’s current job responsibilities” may be found at http://oied.uoregon.edu/staff/dr-charles-martinez-jr.  The University is waiving the costs associated with responding to this public records request.

University of Oregon
Office of the General Counsel