6/1/2010: This is stunning news from Nigel Jaquiss at Willamette Week. (Les Zaitz of the Oregonian has more here.) Oregon Solicitor General General Jerry Lidz has given AG John Kroger two weeks notice. This is fallout from Lariviere’s firing of Melinda Grier: Lidz is her husband.

After the Bellotti verbal contract incident, UO President Lariviere insisted the AG’s office do an investigation and make the results public. Attorney General Kroger won’t release the details of his findings, but he did provide a summary which concluded UO’s General Counsel Melinda Grier had provided “deficient legal representation”. This is a possible violation of the Oregon Bar’s ethics rules and could conceivably lead to her disbarment. No wonder her husband is angry. President Lariviere has some serious political mojo to get this through the DOJ. Last year, when Frohnmayer was still President, Associate AG David Leith quashed an unrelated ethics investigation of Grier.

Where was Jerome Lidz working when AG Kroger hired him as Solicitor General? Harrang, Long etc., the same law firm Dave Frohnmayer is now double-dipping at. I wonder if Lidz will go back there – he can’t be too happy with Dave, after he shoved Melinda under the bus on the Bellotti contract.

Lidz, whose job is the state equivalent of what Supreme Court nominee Elena Kagan does at the federal level, is collateral damage in fall-out from former University of Oregon athletic director Mike Bellotti’s contract.

As The Oregonian reported, Bellotti never had a written contract with the university, an oversight that led to a multi-million settlement for Bellotti when Bellotti left for ESPN. More importantly to Lidz, that sequence led to the demotion of Lidz’s wife, former U of O general counsel Melinda Grier. In April, U of O president Richard Lariviere decided not to renew Grier’s contract and exiled her to the U of O law school.

I like the “maybe you express your dissent” line in Lidz’s email. Because I’m guessing that getting involved in a DOJ decision about your wife would be a violation of some serious rules with some serious potential consequences for a lawyer. Stepping down was probably a smart move. No word yet on the rumors the UO law school will give Lidz an adjunct position co-teaching legal ethics with Grier and Frohnmayer. 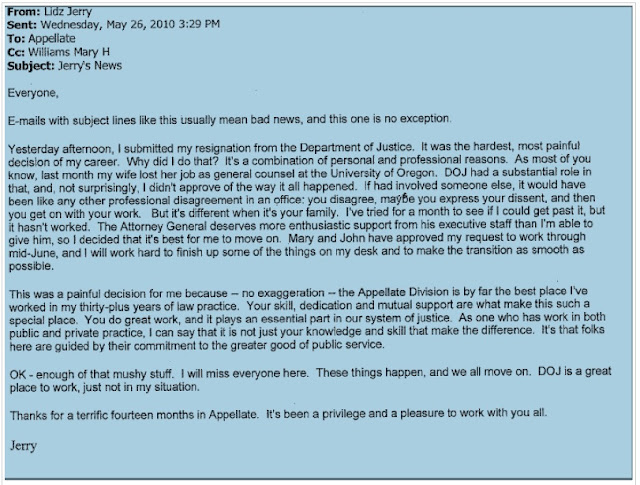