6/29/2010: A helpful reader sent some actual data on the costs of the underground arena parking and how they will split between the athletic department and the academic side. Not sure if this is current. (Click to enlarge.) 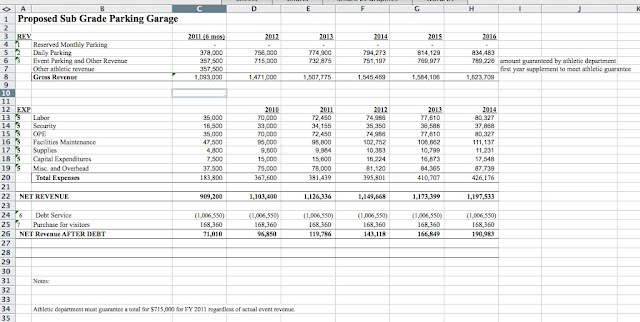 6/22/2010: The latest increase in faculty/staff parking fees (from $300 to $400, following an increase in student fees from $125 to $300) is starting to get people’s attention. The best info I’ve seen comes from the series by Dave Martinez and Alex Tomchack Scott in the Emerald in April.

My take away is that the “self-supporting” UO Athletic Department has figured out how to get UO students, faculty and staff (at least those who drive to work) to subsidize the Arena construction project. We will pay for the construction of the underground parking that was required by the city as part of the approval for the Arena. Underground parking costs 3 times as much as the above ground structure that would have been constructed without the Arena.

Back of the envelope, we are looking at about $600,000 in subsidy from students and faculty/staff per year. Kelly and what’s his name really need the money. Go Ducks.

It’s widely believed the University sells more parking passes to students than it has spaces for them on campus. However, the head of parking on campus, DPS Capt. Herb Horner, said that technically stopped being true when the 2009–10 school year began.

That’s because this academic year, DPS more than doubled the cost of a parking pass for students. From $125 a year, the price rose to $300, cutting the number of students who bought passes from DPS drastically.

Horner said there were as many as 4,000 students with passes before the change, but the number dropped to 1,000 afterward

Story 2 explains the reasons for the increases:

DPS had been in the process of fomenting plans for different structures. Horner said the department conducted two studies on where to place the a new garage, with heavy consideration given to what he called Lot 6-Adam, a grass field across 11th Avenue from Dad’s Gate Station. There was talk of the University of Oregon and Northwest Christian University sharing parking there.

Instead, the University went ahead with plans to build the Knight Arena garage. Because it is underground, Horner said, it will cost three times as much as an above-ground structure would have cost.

The University attempts to create new parking to compensate for any lost in construction, but many of the spots it uses to replace those lost are farther from the center of campus.

In one plan, for instance, the University will ask the City of Eugene to grant it ownership of Moss Street to turn it into a publicly accessible but University-owned thoroughfare lined with parking spots.

And this Editorial does a god job summing up:

In order to complete the parking structure for Matthew Knight Arena, the University tapped into money the Department of Public Safety had collected from all drivers who paid tickets and bought permits for campus parking. In effect, the University is taking from the rest of us to build something few of us will use.

The University made a questionable financial decision receiving the bond to build the parking structure for the arena and then deciding to put that burden of debt on DPS.
Before it was charged with covering the underground arena structure, DPS was considering three new lots around campus that would have added 514 parking spaces. For that project, funding would have come from the money DPS had saved up from parking tickets, passes and meters. It was a logical plan: using money collected from drivers to increase parking for all drivers.

But rather than increasing general parking when enrollment is at an all-time high and the need of parking is widespread, to start repayment on the bond, DPS used the pool of money campus drivers had spent years accumulating to build a structure that fewer people will benefit from. It also comes at three times the cost of an above-ground parking structure.

Now, to pay for the arena structure, DPS is increasing the cost of faculty parking for next year and stepping up its efforts to enforce meters and fine people. Drivers who paid into the fund will not reap the benefits, while current and future drivers will have to pay more for the limited parking that already exists. DPS will gain revenue when arena events require use of the garage. But revenue won’t start accumulating until 2011, and DPS has to start paying for the structure now.

What’s more, more than a third of the 377 spots in the arena parking structure are reserved for users of the Jaqua Academic Center for Student-Athletes.

DPS paying for the arena structure bond in this way is a disservice to those who spent and continue to spend years paying parking fines, buying parking passes and feeding the ever-hungry meters, as little will improve for them. Instead of 514 new parking spaces, the campus community has been relegated to only 242 spaces, which won’t be enough as enrollment continues to increase.

To make matters worse, there are other factors that will decrease parking on campus: Lot 16, near the Knight Library, will be closed after midnight. The parking lot behind the Knight Law Center, which is currently the largest lot available for student use, is the planned spot for a new residence hall. Drivers who get used to parking in the arena structure will have to find other spaces during times when there is an event.

The University had an opportunity to increase the quality of life on campus for everyone while demonstrating sound fiscal management by spending the DPS funding on parking for all students. The money came from campus drivers, and the University should have spent it on something beneficial to all campus drivers, not just a few.