7/9/2010: What do undergraduates do? Economists report that average study time per week fell from 24 hours in 1961 to 14 in 2003. (Babcock has a bunch of other interesting looking papers.) Here’s a breakdown by major: 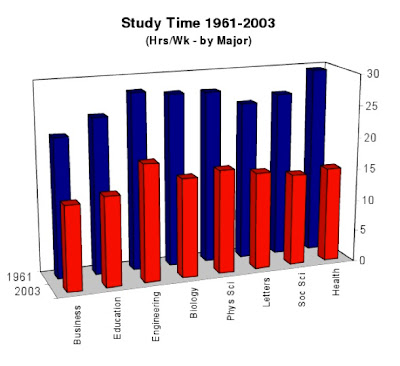 My understanding is that students should have about 2 hours of assigned work for every hour of class time. So a full time student would have 16 hours in class and 32 hours of study time per week. Actually, they put in less than half that – and grades, of course, are way up. One theory is that they are just way smarter than we were.

I could have thought up some other reasons for the fall in study time myself, but instead I cut and pasted from the Atlantic, who copied from Kevin Drum, who collected comments from others. Took me about 5 minutes: