8/12/2010: When John Moseley and Lorraine Davis retired, then President Dave Frohnmayer wrote them extraordinary golden parachute contracts to take advantage of the PERS system. UO paid them half time for 5 years – Moseley for running UO-Bend from his Deschutes fishing lodge, and Davis doing the odd administrative job, while flying to away games on a UO expense account – to proctor athlete’s exams. The contracts were arranged and paid for under the “Tenure Reduction Program” for faculty, but none of them ever taught a class.

When he defended these shams in the Oregonian, Frohnmayer was clearly laying the groundwork for a similar deal for himself. And last year it looked like OUS Chancellor George Pernsteiner had given him one, with this sweetheart contract as “President Emeritus”.

Now that deal is off. 5 days after I asked to see his 2010 contract Frohnmayer signed one – backdated to be effective 5/15. His new contract is the standard TRP deal any retiring law professor would get – starting with a pay cut from $245,700 to 50% of $201,028. Presumably this means he will be paying UO back some summer salary. 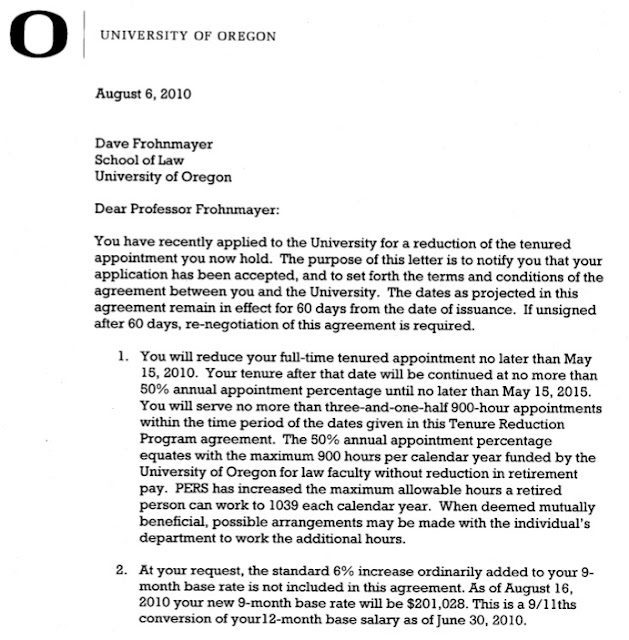 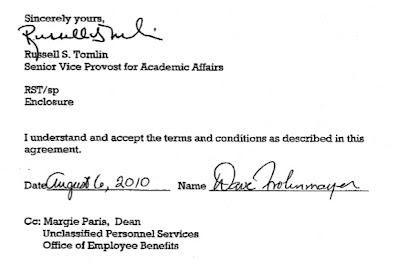 There are still some weird parts to this. My recollection is that a real professor has to be at UO full time for a year after a sabbatical before taking TRP, or repay their sabbatical pay. And Frohnmayer worked a second job at Harrang, Long et al while taking his sabbatical pay – not allowed, unless he can document it was research related. And it’s not clear if he’s really going to teach his classes, or instead team up with real professors who will do the actual work, as he did with Barbara West in the Honors College. Also not clear if he keeps his assistant Carol Rydbom, his dual office suites in Law and the Honors College, and his $186,000 expense allowance. But what a huge step forward for UO – an administrator actually following some of the rules, more or less!

Of course Lorraine Davis and John Moseley can still kick back until 2012, under the special deals Frohnmayer wrote for them, collecting about $120,000 a year each. Meanwhile he will have to teach for his pay, which at a 0.5 FTE will work out to about $100,514. I’m no English professor, but I think they call that irony.