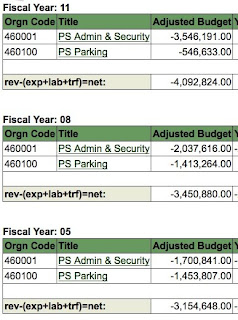 8/31/2010: (Updated with new budget info and below with sombrero photo and details.) A commenter asks about the move to convert the current DPS into an armed campus police force. Greg Bolt’s RG story is here. Here are the budget numbers for DPS for 2005-11. (Ignore the parking numbers, those are net, after parking fee collections.)

In six years there has been a 110%, $1.7 million increase, or seven times what Provost Bean spent on his “Big Ideas” faculty research support plan. This is before all the expenses of this new plan – training, hiring, guns and ammo, etc. In comparison, the budget for the average CAS department increased by just 50% over these 6 years.

So are these spending increases related to a crime surge? No. Violent crimes in Eugene are down, they are down on campuses nationwide, and to the extent there is a trend detectable at UO it also looks like it’s down. In 2008 there were a total of 5 aggravated assaults and 8 violent sexual offenses. If there is any evidence – even anecdotal – that converting DPS officers to regular police and arming them would have made any difference in any these incidents, we haven’t heard it.

Bolt’s story includes the usual blather from Frances Dyke – why is she still making public statements for UO? – and then this, from DPS Director Doug Tripp:

Tripp said what’s different about this effort to change the law is that he and other UO officials have worked hard to make their case with students, faculty, local police and legislators before formally proposing the change. He also believes that many students now have a different attitude about campus police because many come from high schools that had armed officers, often called school resource officers, patrolling the halls.

I think it will take a bit more than this to justify this change, which will take an act of the legislature. At the moment the DPS Officers aren’t even carrying Tasers. Remember the trouble when the Eugene cops tasered a visiting Chinese student in his sleeping bag? Eugene has an entire office devoted to handling incidents like that, which inevitably lead to lawsuits, etc. Who is going to have oversight of this new UO police force? Our General Counsel? We still don’t have one. A review board of faculty and students – you want to be on that committee? Why open this can of worms? Who is pushing this idea besides Doug Tripp and Frances Dyke? Why? Has the Senate heard a report on this? Had any discussion? What are the cost estimates for it? Is there a proposal anywhere laying out the costs and supposed benefits? Any evidence that it would be better to spend money on police and guns, instead of more mental health resources for students? How can something this dubious have risen to the top of UO’s priorities for spending and legislative lobbying?

Update: A anonymous tip sends us to this cautionary story about arming university police, from the University of Central Florida: 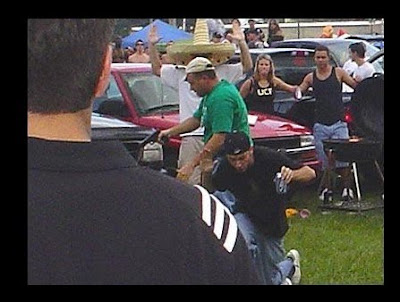 This photo is from a tailgating party at a UCF football game in 2005. Yes, the plainclothes UCF officer in the green shirt is pointing a gun at a student, and behind him, that really is a man in a sombrero with his hands in the air. I know what you are thinking: this is proof why university police need guns, to deal with out of control drunken students in sombreros. What could possibly go wrong? Read the news report:

A cell phone video showed the confusion in the moments leading up to the shooting as plain-clothes Officer Mario Jenkins is seen alone in a rowdy crowd of tailgaters at the Citrus Bowl. Moments after that, Jenkins pulled out his gun and fired it at one of the tailgaters. Then Jenkins was shot by Orlando Police Officer Dennis Smith, who had no idea Jenkins was a UCF officer. Jenkins’ supervisor admitted to having let him go into the crowd without backup, even after telling Jenkins he needed backup.”It was an error,” said UCF Police Chief Richard Turkiewicz. “Major Mingo was distracted over paperwork.”

The officer was killed. And what happened to Chief Richard Turkiewicz, who oversaw this pre-emptive strike on the tailgaters? Frances Dyke hired him as UO’s interim DPS Director. No shit. Shortly after that, Daily Emerald reporter Ryan Knutson won a prize for this expose of DPS spending priorities:

Frances Dyke, vice president for finance and administration, approved Turkiewicz’s trip. She declined to comment on the trip or Turkiewicz’s need for attending, but did say that “directors can’t neglect their own professional development because they won’t stay cutting edge if they do.”

Despite Frances’s efforts to keep her DPS director on the cutting edge, UO didn’t promote Turkiewicz to the permanent job, instead we fired him and hired Kevin Williams, from the LAPD. Williams didn’t last long either, and no one in charge wanted to explain why. From the ODE article by Hannah Hoffman:

When the University gives an employee a new position but does not renew his or her contract, essentially firing the employee, the administration has virtually no obligation to explain why to the public. This was evidenced during the recent shift in the director of the Department of Public Safety. On March 9, Doug Tripp became the director and Kevin Williams, who had held the position since August 2007, was transferred to a different department. The administration announced the move only in an e-mail to staff, faculty and administration.

Frances Dyke wants to give them guns, but she is not going to explain why we hire and fire the DPS Director. She is not even going to answer questions about their spending priorities. With Ms Dyke still in charge, transparency and oversight are always going to be a problem at UO. She doesn’t trust her own judgment and decisions enough to explain and defend them. Neither do we.