After a national search, Lariviere says Geller was the most qualified candidate. “His attitude towards transparency and accountability was exactly what I was looking for,” Lariviere said.

KEZI requested an interview with Randy Geller and also requested just a photograph of him more than two weeks ago. Neither of those requests have been granted by Geller or the university.

Yes, that’s the attitude alright. More on this after I have a few stiff drinks and then sleep them off. 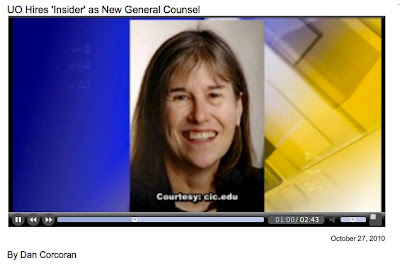 Meanwhile the Oregon Commentator develops the best theory yet on Geller:

Many people see the UO’s refusal to let people talk to its new legal honcho, or even know what he looks like, as a betrayal of the transparency UO cheese Richard Lariviere has promised. They’re reading the tea-leaves wrong. Here’s the truth: Randy Geller doesn’t actually exist. …

But this is just a theory. I’ll give a UO Matters coffee cup to the first person who falsifies it, with a picture of Geller at Grier’s desk.