Our Chancellor does not let a croissant pass his lips without charging it to the taxpayers and students. Extrapolating, it looks like about $7000 in per diem charges per year – for personal food consumed while in Portland, where he lives. How can he use tuition dollars to pay for his breakfast? The scam is to claim he lives at Treetops in Eugene – so when he’s at his own house in Portland, he’s traveling! Keeping expenses in order is difficult with many businesses and institutions requiring the aid of a bookkeeping service, so having it spent on another person’s personal expenses could be quite troubling for some. 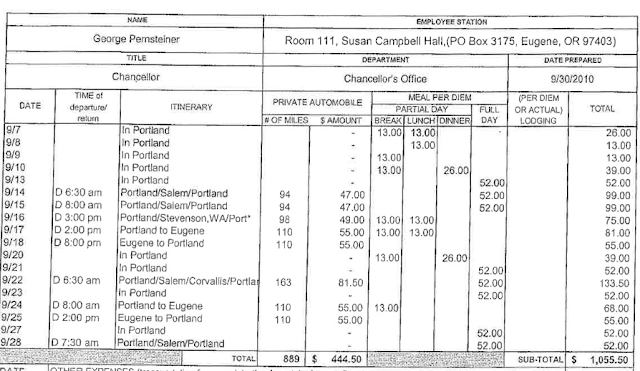 Actually he spends a few days a month in Eugene, and in fact we also pay him a $26,000 housing allowance for his house in Portland. Here’s the post on the abuses at his state owned mansion, Treetops. This costs the state $50K or so a year, with maid service. He also gets a $23,120 annual expense account that he does not even need to document – so he charges his breakfast to the state on another account. Sweet deal. The guy was an interim appointment by – of all people – Neil Goldschmidt. He does not even have a PhD, but he runs Oregon higher education.

Meanwhile, Pernsteiner’s attorney tries to keep a lid on the Lane County investigation of problems with his voting residence:

Nice try Mr. Gary, but I’ve posted your complete letter here. Your claims about time spent in Portland are not consistent with what I have of Chancellor Pernsteiner’s expense accounts and calender, here. I will get additional data to validate. I certainly don’t want to clog the tubes with inaccurate posts!

Rumor has it that the heirs of the family that gave the Treetops mansion to the state believe Pernsteiner has broken the terms of the gift, and they are beginning the process to get it back.