10/30/2011: OIED VP Charles Martinez was one of those interim appointments gone permanent and bad. He had a remarkable ability to screw up UO’s diversity efforts, despite spending most of his time off campus double dipping at his second job at OSLC.

Last year Lariviere bought Martinez off with a no-search tenured job in the College of Education, then this fall he appointed VP for Student Affairs Robin Holmes to run OIED on an interim basis. My prediction? The secretive search run by Scott Coltrane and “Diversity Search” at a cost of $100,000 fails, and Holmes then adds the VP for “Diversity and Institutional Equity” job to her portfolio.

And – trust me I *really* never thought I would say this – maybe that’s a good thing. Holmes has a stubborn flaw as an administrator: She just won’t consult with faculty or students about anything – from moving graduation day, to the EMU renovations, and now to the reorganization of OMAS. But the reorganization itself is long overdue, it’s sensible, and Holmes appears to have support from the people who want to change things for the better. OIED needs good administration.

As this ODE story by Mei Tsai reports, some of the students that use OMAS are now up in arms. Their blog is here.  This was predictable, they should have been brought into the reform process. The story I’ve heard is that they are being manipulated by those OMAS advisors who are going to get reassigned by VP Holmes to actual real jobs. Jobs advising students, reporting to administrators with goals, and held to account for their productivity. Nobody likes that.

VP Holmes is apparently scheduling meetings with the students next week. I hope this gets fixed. Meanwhile here’s the latest Org chart: 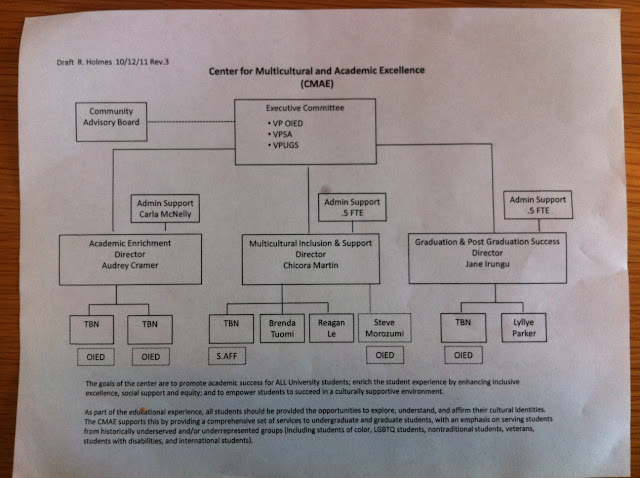 One Response to Holmes cleans up Martinez’s mess