10/4/2011: (Updated) UO’s Clery Act crime statistics for 2010-2011 are now available. I’m no econometrician, but I don’t see an increase – certainly not after you adjust for the 10% increase in students from 2008-2010. (Except for an arson blip and a shift from disciplinary referrals to arrests, for drugs and drinking.) This lack of a data driven argument is why Doug Tripp resorts to scare stories about “bad characters” coming onto campus when he argues for budget increases, sworn officers, and guns. The UO proposal to OUS for a sworn force is here. They say there is as yet no decision about arming the officers – but firing range practice has already begun. There is not a word about the cost, or about oversight, etc. in this proposal. But read this:

By a factor of five, UO students contacted legislators and urged them to pass SB 405, because they support the legislation and its ability to improve campus safety. Significant and ongoing campus and community outreach and engagement related to the legislation has occurred over the last year and continues. As a part of this effort, the UO shared information and sought input at four town hall meetings and two University Senate meetings, met with student leaders regularly, attended 10 neighborhood association meetings, and initiated conversations with local government and law enforcement officials and parents of UO students.

Students support this 5 to 1? In Greg Bolt’s RG story:

But (ASUO President Ben) Eckstein questions that and said he’s asked the university for the source of that information. He pointed out that in a spring ballot, almost 4,000 students voted to keep the public safety department as it is. The Oregon Student Association also opposed the bill allowing campus police.

This sounds like another made up number from Frances Dyke and Doug Tripp, like their claim this would save campus money – when it has already cost millions that should have gone to academics. Here are the real crime numbers: 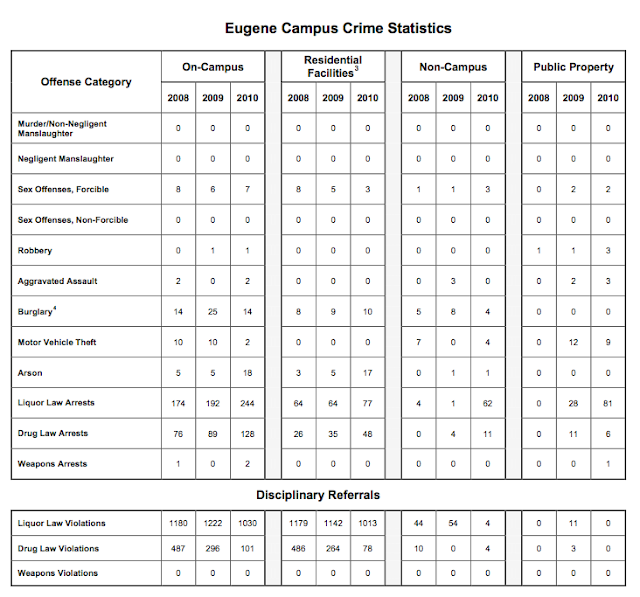 One Response to More students, no more crime