2/8/2012: Excellent story in the Chronicle on the Delta Cost Project on higher education, and their influence in the Obama administration and Congress.

I started this blog back in 2009, after the furlough town hall where the administration tried to convince the faculty to take voluntary pay cuts. (They took the cuts themselves too – but then offset them with raises. Provost Bean started 2009 with an annual salary of $295,000, took a few unpaid furlough days, then got a raise to $306,800. This was almost exactly enough to offset his furlough days. Actually it left him with an overall *gain* of some $246 for the year.) One striking part of the meeting was when Bean claimed UO’s administrative expenses were just 38% of our peers: 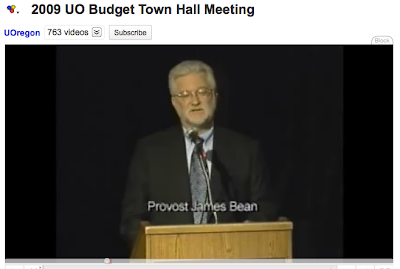 When I tried to get Bean to show me the documents supporting this assertion, I got the runaround for months. They eventually tried to charge me $75 to see the public records. Then it turned out Bean was using the wrong numbers. I got the right ones from The Delta Project and their online database of the federally required reports to IPEDS. Looking at UO’s spending per student FTE compared to Carnegie Public Research university averages, for 2008, they show UO spent:

Definitions here. These are the result of long trends. Since 2001 UO enrollment is up 26%, TT faculty up 9%, and administrators up 36%.

Now the faculty Union organizers will be staging a town hall of their own, Th Feb 16, 4-5:30 in 115 Lawrence. The first presenter:

Howard Bunsis, Ph.D., CPA, JD, an expert in the analysis of university budgets, previously presented his analysis of the UO’s financial condition in February 2011 (available online at http://uauoregon.org/financial–analysis-of-uo). This new presentation extends his analysis to budgetary developments during 2011-2012, some of which may have implications for the current legislative session.

His analysis from last year relied heavily on the Delta Cost data and was a welcome contrast to the distortions and confusion that our administration has put out on these issues. I’m looking forward to his update.