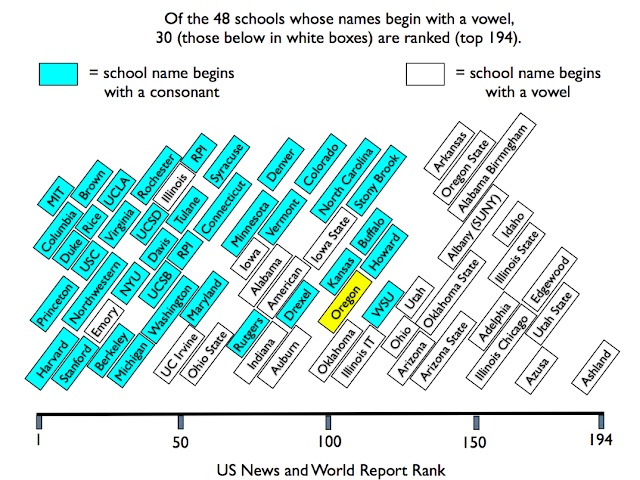 Figure and explanation sent to me by Architecture Professor Peter Keyes:

My Conclusions from the Data:

There is an undeniable inverse correlation between university names that begin with vowels and average school quality.  (Presence of vowel correlates to lower ranking).

Of course, causality is not indicated.  Does low quality lead to vowels, or do vowels lead to low quality, or neither?

The question we should ask ourselves:

If the UO wants to increase its quality, should it associate itself with the top schools, the vast majority of which (47 out of the top 50) begin with consonants?  Or with the lower-tier schools, where nearly all the vowels cluster?

Oregon’s association with this lower-ranked group is particularly irksome;  while all the other vowel-schools have clear etymologies (usually of Native American origin or named after a prominent individual), no one really knows where the name “Oregon” comes from.  But in this fact lies a great opportunity, a way to effortlessly change the perception of our university:  it should be easy for us to change our name, as there are no descendants or vested groups to take umbrage at the change.  (Perhaps we could deflect any possible objections from the alumni by suggesting “University of the Ducks”, or something like.)

As we strive to increase the (perceived) quality of the university, this proposal has one great advantage:  it does not require  increasing the state appropriation, raising tuition, hiring new faculty, or increasing anyone’s salary.  We can associate ourselves with the highest-ranked universities in the country for a negligible cost.

And in the brave new world of corporate sponsorship, has anyone ever calculated the possible value of university naming rights?  We should be willing to consider this, as long as there’s a consonant involved.

Peter’s post is a response to this, from Michael Raymer in physics.