6/15/2012 update: I’m no legal ethics professor, but this doesn’t look good for Frohnmayer: 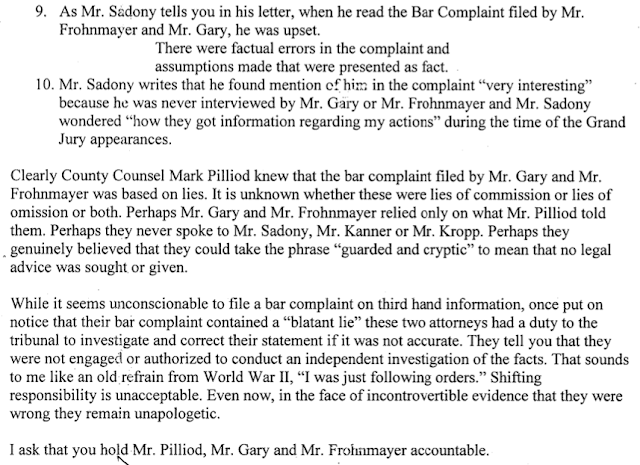 The full letter is here. The Bar’s disciplinary counsel has given Frohnmayer and Gary until 6/21 to respond. The Bend Bulletin reports that the county has spent about $100,000 on the matter so far, presumably much of it to Frohnmayer and Gary’s firm. Meanwhile Flaherty has filed a bar complaint against Pilliod.

5/21/2012: The latest Oregon Bar complaint docs are here. Keeping up with Frohnmayer’s ethics issues is a full-time job, I’ve only glanced at these, I think the meat is in the last few pages.

4/21/2012: I’m pretty sure this will only interest my law school readers, at best, but I thought I’d post this Oregon State Bar ethics complaint, filed in March by Valerie Wright against Frohnmayer, Bill Gary, and Deschutes County Counsel Mark Pilliod for the record. It’s a twisted story. The Bend Bulletin has a helpful timeline.

Wright is a lawyer and the wife of Deschutes County DA Patrick Flaherty. From what I can tell Deschutes county hired our former Pres at $550 an hour last year to help Pilliod and the county commissioners with a Bar ethics complaint they were supporting against Flaherty, who had opened a grand jury investigation against Pilliod involving a relatively trivial sounding violation of public records law – or maybe I’m jaded. Or maybe this all goes back to Flaherty defeating the commissioner’s favorite longtime DA in an election. 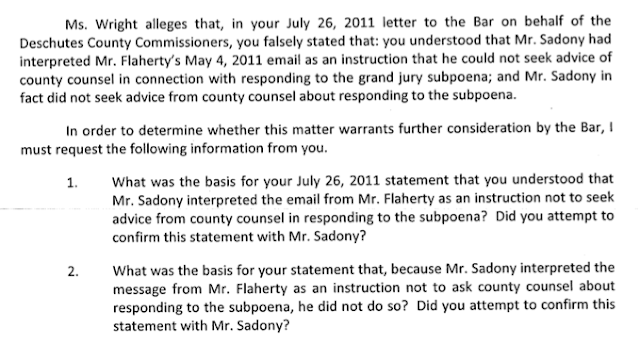 Frohnmayer seems to have become a specialist in making ethics complaints against his fellow lawyers – he’s got another one going against Oregon AAG Sean Riddell, apparently payback for Riddell looking too closely at the consulting deals of Kitzhaber’s girlfriend Cylvia Hayes.

Frohnmayer calls the complaint “a political use of the bar process.”

I’m sure Dave’s shocked. (Thanks to a reader for the link.)