Update: Berdahl and Geller appear to be on the same page about this. They won’t show this IAC member the Glazier contracts or other material, claiming the BSK investigation has nothing to do with academic matters, and that the IAC’s charge is wrong. From Geller:

It appears that you are confused. The compliance review project is being conducted in response to the NCAA investigation and pursuant to the same contract with Bond Schoeneck and King. Invoices and other documents are available on the same basis as any other similar matter.

As you know, Oregon University System Internal Management Directive 8.036 makes the President (and the director of athletics) responsible for all aspects of the intercollegiate athletics program, except that the faculty athletics representative, who is selected by the president, determines the athletic eligibility of students participating in the intercollegiate athletics program. The constitution approved by the university senate in December 2011 provides for a faculty role only in academic matters.

There are no academic matters at issue in this NCAA investigation. Thus, there is no role for the IAC. Nevertheless, I am sure that Rob Mullens will be happy to share the results of review with the IAC when it is complete.

7/30/2012: That’s one interpretation of this. Oregonian reporters and the UO Senate IAC have been trying to get information on Mike Glazier’s “Compliance Review Project”. This CRP appears to be some sort of project reviewing of UO’s NCAA Compliance, and is distinct from the Kelly/Lyles investigation Glazier is also doing.

NCAA compliance is just the sort of thing the IAC should be in the loop on. When UO is trying to show we have methods in place for institutional control of athletics, in the 2006 NCAA recertification report, we tell the NCAA:

The Intercollegiate Athletics Committee (IAC): It is a faculty and student committee that reports directly to the President of the University Senate. They provide advice and consultation to the Director of Athletics and the President on a variety of issues. They also provide faculty and student oversight and input to the Department of Intercollegiate Athletics.

And before Berdahl cracked down on public records access, I was able to get this one rather thoroughly redacted invoice from Geller on the review project. But now Berdahl won’t let the IAC get anything from the IAC without his personal approval. And, in his most recent email to the IAC, it appears Berdahl knows nothing about this review. There’s loss of institutional control for you.

One result of the Freeh report on Penn State has been criticism of the sorts of secret investigations Glazier runs. While Freeh apparently made everything he learned public, Glazier hides behind attorney-client privilege and in the end will only release what he and his employers want to release. Which won’t be much – he and Geller and Mullens even want to hide the facts from the Senate committee charged with keeping tabs on UO athletics. And perhaps they’re even hiding stuff from Bob Berdahl. 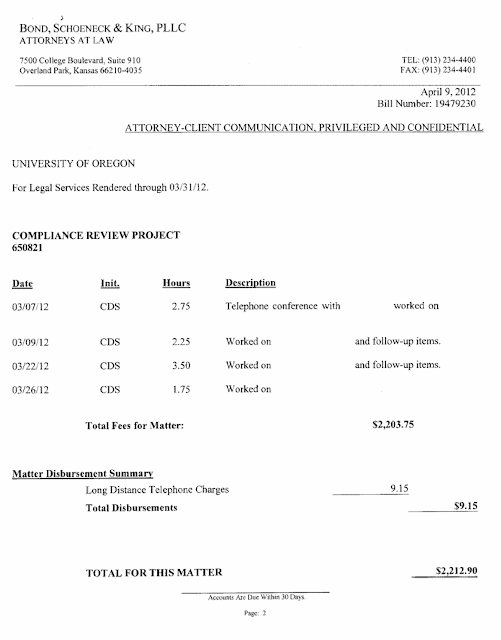