I’ve written before about Dave Frohnmayer’s success at using his sabbatical to restart his legal career at Harrang, Long, Gary and Rudnick. And his efforts to defend Mark Long, the son of one of the partners, against accusations by John Kroger’s DOJ that Long used his office to help Kitzhaber’s girlfriend get a grant for her energy consulting business. And the efforts of Harrang, Long etc. to get the contract to represent UO in legal matters – including their efforts to use Frohnmayer’s UO connections as a hook, while simultaneously promising there was no conflict of interest in having UO hire a firm where its President Emeritus was working. They somehow neglected to note Frohnmayer was still on the UO payroll as well as theirs:

I love that “at your discretion” bit.

So, what’s UO’s General Counsel Randy Geller got to do with this? As part of their defense of Long, Frohnmayer’s firm started a public records suit against the Oregon DOJ. They won, and now they want $864,000 in legal fees from the state’s taxpayers. Nigel Jaquiss has the story here. What’s Frohnmayer’s cut? Not sure, but he bills at $550 an hour, so figure a couple hundred large. And Geller – originally hired by Frohnmayer – has now pitched in to support this payday for his former boss: 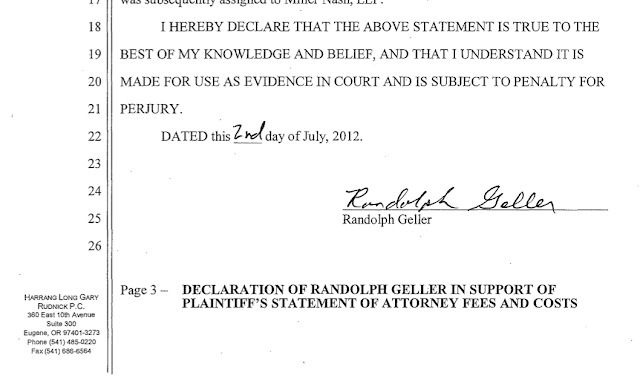 Harrang et al. uses Geller’s letter to argue that they should get double the $434,000 in legal fees Harrang would otherwise get from the state. Why? Because they say it shows Kroger “black-balled” Harrang Long etc. from representing UO in other important and presumably lucrative cases. Instead Kroger hired Miller Nash.

Whatever. In April Bob Berdahl and Geller hired Harrang’s Sharon Rudnick to help Johnson Hall deal with the faculty union. Ms Rudnick also chimes in on the effort to get $864,000 from the taxpayers, link below. 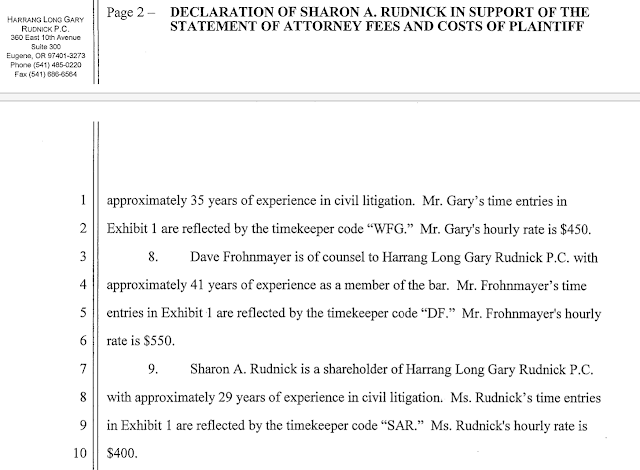 And just in case all this didn’t leave you totally cynical, here’s an email from Interim President Bob Berdahl, announcing he has reached out to Dave Frohnmayer:

As part of the transition, I reached out to UO President Emeritus Dave Frohnmayer to ask him to serve as a part-time special assistant to the president for the summer. In this role, he will assist me with specific external relations and stewardship assignments, continuity of communications with key stakeholders and with institutional readiness issues involving the possible establishment of an institutional board. …