Gottfredson in the RG:

Diane Dietz on our new President – she’s not happy with his fake news conference:

Gottfredson said he’ll spend the rest of the summer exploring the campus, meeting with deans and faculty and learning the issues.

Fair enough, but remember, winter is coming. Then there’s this:

Treetops, at 2237 Spring Blvd., is an 8,111-square-foot, 1911 mansion in the Fairmount neighborhood. The merchant that donated Treetops to the university system in 1938 specified that either the state system’s chancellor or the UO president has to live in the house.

But Chancellor George Pernsteiner owns a home in Portland and is available to live at Treetops only part time. Consequently, it costs the state upwards of $50,000 annually to keep up a part time residence.

But the concept of the UO president living at Treetops, which would free Pernsteiner to live wherever he chose without violating the covenant, has not gone by the wayside.

“We’re having some conversations about that,” Gottfredson said.

Say, I wonder if Pernsteiner’s lawyer, Bill Gary – a partner in Randy Geller’s favorite law firm – is still claiming that Pernsteiner intends to return to live in Lane County? 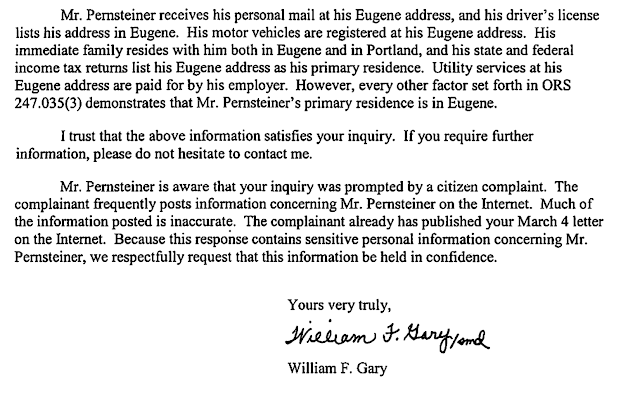 Because he’s still got himself listed on Kate Brown’s voting rolls at 2237 Spring Hill Blvd, Eugene. And it’s a felony to lie to the elector about that sort of thing.