9/25/2012: Sorry, long post. The gist? If you want action at UO go to Pete DeFazio and your union – the latter is DeFazio’s advice. While Oregon’s public records law website says:

Government transparency is vital to a healthy democracy. Public scrutiny helps ensure that government spends tax dollars wisely and works for the benefit of the people. Oregon’s Public Records and Meetings Laws underscore the state’s commitment to transparency. Government records are available to the public, and governing bodies must conduct deliberations and make decisions in the open.

that’s the theory, not UO’s practice.

I made a public records request for documents on expenditures to address Oregon Hall air quality on August 16. A month later I got a few scraps of spreadsheets from the PR Office, and a letter saying that if I wanted more info the office, which reports to UO President Mike Gottfredson via Dave Hubin, would charge me hundreds of dollars. They told me that by their standards the public interest did not justify a fee wavier. Meanwhile the OH people went to Congressman Pete DeFazio, who told Gottfredson to get on it: 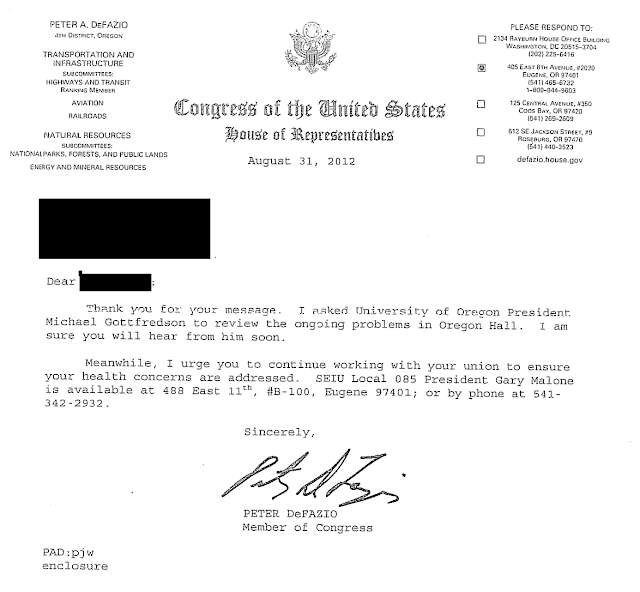 A week after this letter George Hecht was organizing public meetings and hiring a consultant to dig into the problems. An actual air-quality consultant, not a Robin Holmes manipulate-public-opinion consultant.

But the public records office still refused to waive the fees. I pushed this with Lisa Thornton during her interview for UO’s Public Record’s Officer position a few weeks ago. I got some weird pushback from UO Journalism and Communications Dean Tim Gleason, who was also at the interviews. I don’t understand why Gleason has decided to devote his time to trying to weaken public records access and transparency at UO, instead of helping expose and stop Robin Holmes from spending $17,000 to $55,000 in public funds to manipulate the student vote, but I’m sure he’s got his reasons.

Ms Thornton is a competent person, formerly interim and now promoted to the permanent PRO job. I’m sure she has just been following the orders she got from Hubin and Berdahl on how to delay and frustrate people looking for public records. And on Friday, she suddenly caved and gave a full fee waiver. I’ll post the docs when I get them. This is the first time UO has waived fees in response to a public interest argument since Hubin and Berdahl cracked down on public records access in May. I’ll call it a 5% improvement in transparency, still a long way from where we were with Lariviere, and even farther from where UC-I was under Gottfredson.

While UO will stonewall release of legitimate public records that might embarrass some administrator, it has a huge and expensive public relations apparatus and many staffers dedicated to putting out stuff to try and UO’s administrators look good. That work is so clearly impossible that it must pay very well indeed, right, Provost Bean?

My guess is that Thornton and Hubin waived the fees on these documents for one simple reason – someone in JH looked at them and figured that their release would not be as embarrassing as continued stonewalling in the face of DeFazio’s letter above and the persistence of those who work in OH. That’s not exactly the public-interest cost-benefit test the law envisions, but if that what it takes, this blog is plenty willing to help supply the necessary levels of embarrassment.