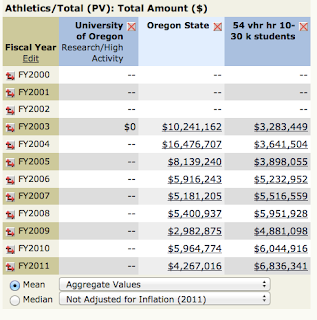 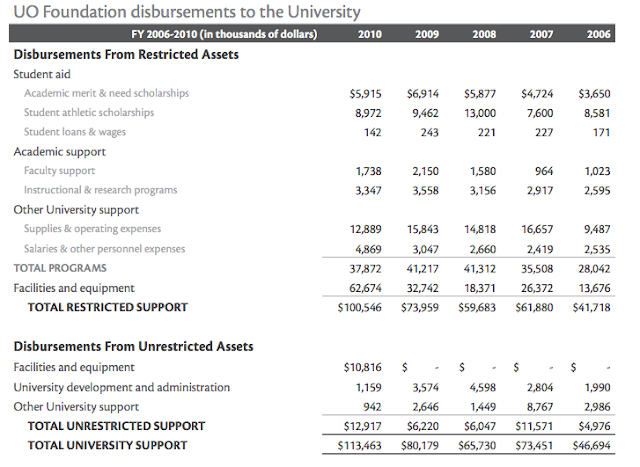 Email trail:
Sent: Friday, July 16, 2010 11:17 AM
I was looking at the amounts the UO Foundation reports disbursing to athletics for scholarships, and comparing that to the amounts that the AD reports spending on scholarships. (From BANNER, via Nathan’s online Financial Transparency Tool.) They are quite different, as you can see from the attached spreadsheet.
Can you tell me the reason for the difference?
Thanks, [UO Matters]
On Jul 16, 2010, at 11:30 , Jamie Moffitt wrote:
I am out of the office today, but would be happy to look into your question when I return on Monday. At first glance the BANNER scholarship figures look consistent to me with other figures I have seen. The Foundation figures look higher than I would have expected – I will need to do some research to figure out why this is the case. I will let you know what I learn.
Jamie
On Jul 19, 2010, at 19:15 , Jamie Moffitt wrote:
I’ve done a bit of research on your scholarship question and I’ve learned that the difference between the Foundation figures and the BANNER figures is due to a difference in accounting classification. The student aid figures that you pulled from BANNER represent tuition remissions, as well as student aid for books and room and board. The Foundation classification for student aid includes a broader range of direct student support including things like medical expenses, insurance, and nutrition support. As the Foundation and the University are two separate institutions, their accounting classification structures are different.
Jamie
From: “Jamie Moffitt”
Date: July 21, 2010 9:53:26 PM EDT
I was just about to send you a note. Here it is:
There are a broad range of BANNER account codes that are used for different types of student support. For example, meals for athletes are recorded under account code 20300, medical support (GTF trainers) are recorded under account code 24999, life skills support (speakers for student trainings) would show up under account code 24599, nutritional support (student staffing) shows up under account code 10501, etc. These are just a few examples. I believe that most, if not all, of the difference between the foundation and BANNER numbers that you sent me for FY2009 (BANNER: $7,442,824; Foundation: $9,462,000) are the result of the difference between BANNER and Foundation’s accounting classification structures. There can also, however, be timing differences that attribute to differences between the two institution’s figures. The Foundation records expenses when it transfers funds to the University. The University records expenses when the funds are spent. While the majority of the time these two activities occur in the same fiscal year – this is not always the case.
Jamie