Ducks to play in Felony Bowl

By uomatters | 11/25/2012 - 3:51 am |11/25/2012 Uncategorized
UO is headed for the Fiesta Bowl, unless the NCAA steps in with those long dreaded sanctions over the Chip Kelly / Willie Lyles deal. The Arizona bowl’s former CEO is to be sentenced on multiple federal felony charges on Monday, and state charges Wednesday sometime next year since he’s now singing to the cops.
The Fiesta bowl is famous for corruption even by the NCAA’s competitive standards. NYT story here. Former CEO John Junkers – paid $600,000 plus expenses by the non-profit organization – has pled guilty to a felony charge of using profits from the non-profit bowl to buy off state politicians. There were other lapses involving the use of Fiesta money for purposes as varied as treating “student athletes” to strip club visits to buying flowers for UT admissions officers who were evaluating his daughter’s honors college application. You might think that covers the spectrum, but the 283 page report has more: 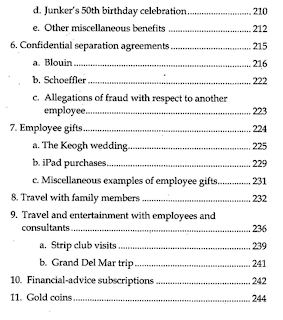 And what with all the gold coins you’d be right to guess there’s not going to be much left over for the players. Oh right, they’re amateurs. I mean for the administrators. UO’s 2011 Fiesta trip left the AD with a $285K loss. Last week I asked Lorraine Davis for the list of administrators and families that would travel with the team to this year’s bowl game, but no answer yet.

Sam Stites had a great ODE story on the Rose Bowl costs last year. The Fiesta bowl people are presumably creative enough accountants to have already deducted a fat travel allowance from the payout, so Rob Mullens can claim it’s really not costing UO anything to take the athletic department’s Johnson Hall stooges off on yet another junket. Right, Lorraine?

Some of the money used for the political payoffs apparently came from UO’s 2011 Bowl appearance. Playoffpac.com had the story on another Fiesta kickback scandal, here, and here’s some info from my post on that:

“We believe that this arrangement may violate Connecticut’s prohibition on ‘receiving kickbacks,”’ the PAC’s co-founder, Matthew Sanderson, wrote in a complaint filed with state Attorney General George Jepsen, obtained by The Associated Press. UConn lost this year’s Fiesta Bowl to Oklahoma and also lost money on the game. In the complaint, Sanderson noted UConn spent $460,000 in hotel lodging and meals.

Here’s the complaint filed with the Connecticut AG – apparently they filed a similar one with Oregon AG John Kroger, no idea what became of it. Oregon of course played in the BCS championship at the Fiesta Bowl in 2011. The athletic department paid the organizers $706,541 for food and lodging. Where did the kickback money go? Apparently the organizers spent a chunk of it on illegal political contributions and strippers. I’m not kidding, NYT story here.

Oregon State President Ed Ray criticized the Fiesta Bowl situation in the Oregonian back in March, when the original scandal broke. Former UO President Frohnmayer was a longtime president of the BCS, which oversaw – if that’s the right word – the Fiesta Bowl, and he is still a vigorous BCS supporter.

3 Responses to Ducks to play in Felony Bowl