This “administrative advisory group” will not even make a written report to Gottfredson. Wouldn’t want to leave a paper trail on their transparency recommendations!

Meanwhile JH is spending tens of thousands of tuition dollars on “Around the O” PR spin, while nickeling and dimeing journalists and bloggers trying to get real information through the public records law. The SD Tribune has a good story on this trend:

There used to be one government PR specialist for every four reporters in America; now the relationship is almost 1-to-1.

But see below – UO’s Journalism Dean Tim Gleason (for a few more months) isn’t worried about the many hundreds of thousands UO spends on PR flacks – he’s worried about how to stop reporters from getting a few $1000 worth of UO public records without fees and delays.

On Roster: (italics if present)

Guests: Your blogger and an Anon reporter type, who must have found out about the meeting from this blog, because Hubin sure didn’t tell anyone.

Agenda:
They didn’t send it to me, sorry. Printed copy includes “best practices” stuff, something Kim Sheehan on “public interest”.

Live Notes: Usual disclaimer: My opinions of what people meant, not a quote unless in ” “.
Dave Hubin: Usual pleasantries. 1.5 years working on public records. Charge of this group: This is an AAG, not a committee because we want to cut the faculty and the STC out of things and that requires an end run around Kyr and the Senate.

Dave’s history: PRO formed 2 years ago by Lariviere because Melinda Grier fucked up. Turnaround time is now ~7 days. (Not true for the ones Geller steps on – i.e. everything of interest – those typically take ~30. DOJ says 10 is typically reasonable). Lariviere proposed fee waiver (not true: Senate had asked for this a year prior). Lariviere asked for log of requests and follow-through. (Not true. STC fought for this too.) Hubin says $ limit caused problems, still needed to convert time estimates to $. (How hard is that – it’s multiplication.)

Hubin then switched to one hour. He casts this as efficiency – in practice it lead to a large and noticeable decrease in responsiveness. Additionally, the interim PRO, Lisa Thorton, with Hubin’s blessing, stopped approving any fee waiver requests, a policy which continues to this day unless the requester is able to figure out how to embarrass the administration into it, as UO Matters did with the Oregon Hall air quality docs.

Hubin will not even share the opinion from Randy Geller which purports to justify PR Officer Thornton’s refusal to even explain her fee waiver denials. 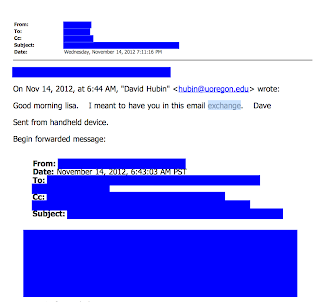 Kim Sheehan: Does the money go back to departments? (Not until UO Matters discovered it wasn’t, now it does.)

Lisa Thornton, PRO: Reviews PRO website, here. Sheehan: No anonymous requests? True – all names except students. Hubin: Good Q for group. We could. Hubin: We would allow this for whistleblowers. (Not true, I’ve tried it).

Dietrich Belitz: Who determines what gets posted automatically? Thornton: It’s only athletics contracts. These and other docs are hidden from Google, by our special $25,000 software, but if I have them and someone somehow finds that out, I send them out.

Hubin: This group could recommend posting more stuff – e.g. contracts over $100K. (Oregon law requires UO to do this annually, but Geller hides a lot anyway.)

Thornton: Comparison of that other AAU’s do. Claims one hour wavier is working – for whom? Still working on the definition of the public interest. Health (aftermath of Oregon Hall air quality fiasco and UO Matters pushing it). Wrongdoing – we waive fees if we think there’s evidence of wrongdoing. Sure you do. 20% discount for “traditional media”.

Tim Gleason: Back to his claim that law allows them to charge fees even when the public is interested. Wow does he have a problem with giving away documents to the public. He’s all about the “burden on the providing organization”. This guy is Dean of Journalism? Not for long it seems.

Belitz: Why not put everything that’s clearly a public record up on the web – e.g. as Portland does with property records. (Many municipalities do this with many things). Hubin: We could do this, do we want to? Q for this group.

Jennifer O’Neal (UO archivist): Retention: State mandates retention schedule for UO docs. As of 3-4 years ago we ran out of space, now take in only after about 15 years. Have a grant to make them available to researchers. These now are getting utilized. We help PRO or work directly with requestors.

Hubin: How good a job are we doing with retention?

O’Neal: Some dept’s are good, many don’t think about it, have staff. (And some are simply hiding things.)

Hubin: Thanks, that’s it. We’ll use doodle to find a time that we can hide from the public again.

O’Neal: Is this group going to come up with anything tangible, or just meet? (Let me guess – she’s new here.)

Hubin: I might take some of what you say to Gottfredson, I might not. It’s all advisory. Not even a written report!!!