12/12/12 update: County DA calls Geller to the office to explain his redactions

12/12/12 update: Lane County Chief Deputy DA Patricia Perlow has asked for a two week extension to respond to my petition on Geller’s redactions, which I’ve said yes to:

I am requesting a two week extension to issue the Order related to your request.  I have been researching the matter and conferring with an Oregon DOJ attorney and I cannot get an adequate Order issued by the deadline today.  I expect I can have the opinion written by the middle of next week, but am asking for two weeks to allow for any unexpected surprises in my schedule.

Thank you for your consideration.

12/5/2012. See updates below. Those of you who free-rode on donations for this PR request will hold your manhoods cheap, whilst any speaks who has contributed to the UO Matters public records fund. It’s epic.

After the usual delays I raised $240 in part from readers, and got back some heavily redacted documents. So I filed a petition with Lane County District Attorney Alex Gardner:

… As you can see these documents are heavily redacted. Almost completely redacted. Virtually nothing of substance is not redacted. Only a a few dollar totals and randomly sprinkled common words are not redacted. UO did not provide any explanation for any of these redactions.

Therefore, this is a petition asking you to:

a) order UO to waive the fees for these records under the argument that they are in public interest, or order UO to provide an explanation for their denial of the fee waiver request,

b) order UO to provide unredacted versions of these public records, or explain the reasons for their redactions,

as I believe the AG’s interpretation of Oregon PR law requires.

Thank you for your assistance with this petition, …

From the DA’s office to Randy Geller:

Based upon the attached record, it is apparent that the University is relying upon the attorney/client privilege in redacting the emails provided to Professor [ ].  I would like to schedule an appointment to meet with you to confirm that the records at issue are in fact exempt from disclosure and that the redaction is appropriate.  Please let me know when you are available.

Uh, I don’t know what you mean, Occifer. My GC Emerita’s magic marker must have sprung a leak, hic: 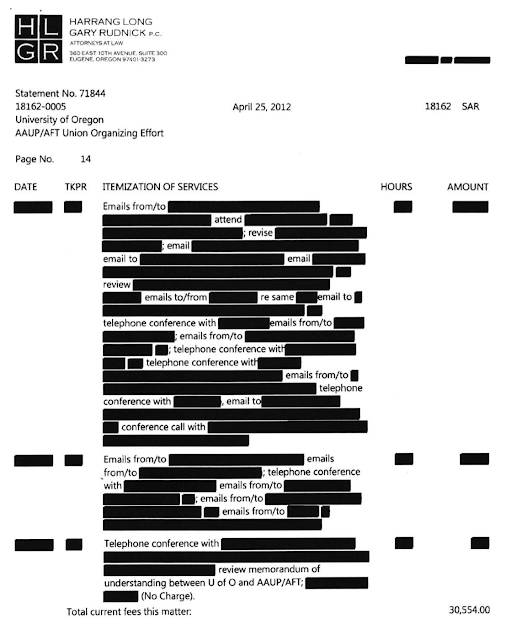 Full files for Harrang, Long, Gary and Rudnick here, and for Curiale, Hirschfeld and Kraemer here.
For a comparison of redactions, here’s another invoice from the same HLGR firm, obtained via a public records request to a competent general counsel who follows state law, Mark Pilliod of Deschutes County. No redactions. (While Geller and Hubin charged our readers $235.88 for the Rudnick invoices, Mr. Pilliod waived fees, on the basis of public interest. And he sent the invoices within a few days of the request, not 5 weeks later.) 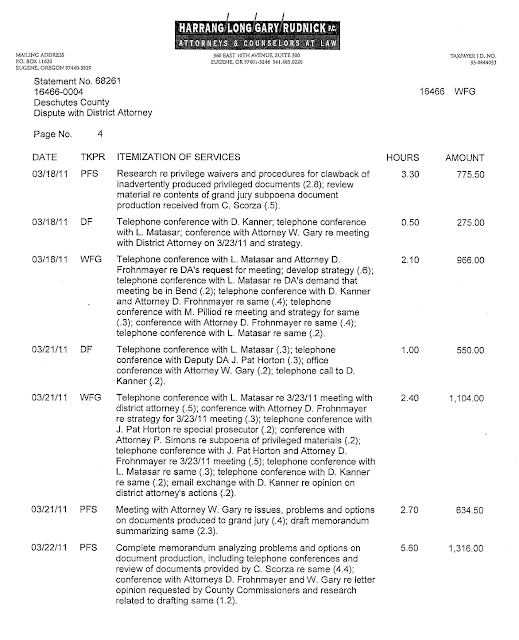 And here’s yet another HLGR invoice, obtained from a public records request to the Oregon Department of Justice – note the complete descriptions of work, from the same Sharon Rudnick that Geller hired to fight the faculty union. (And a few from Dave Frohnmayer too.) The DOJ also provided these documents at no charge. These documents are from a public records case where Randy wrote this letter defending HLGR’s efforts to double their charge to the state’s taxpayers to $864,000. 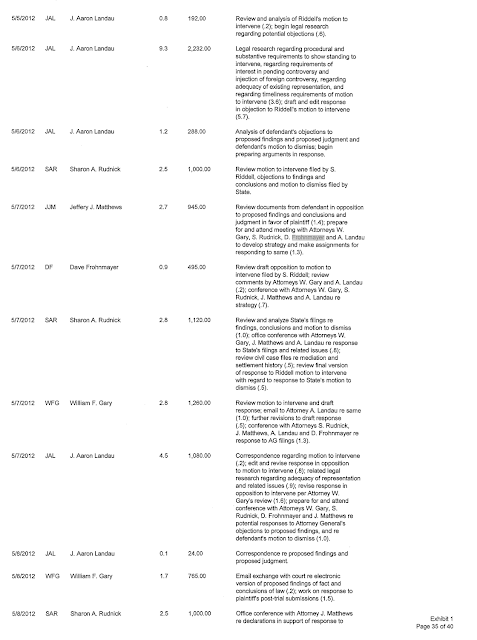 18 Responses to 12/12/12 update: County DA calls Geller to the office to explain his redactions