Update, from the comments:

One of the groups leading the attack against the restructuring is the Oregon Indian Education Association. Their president is Alison Ball. http://02af27e.netsolhost.com/OIEA/welcome-to-oiea/board-of-directors/

She is the wife of Tom Ball, one of the 3 AVP’s that was just reassigned: http://diversity.uoregon.edu/dr-tom-ball-assistant-vice-president

I haven’t seen any acknowledgement of this rather obvious conflict of interest in any of the statements her group has made opposing the OIED restructuring, including this online petition: http://02af27e.netsolhost.com/OIEA/calltoaction/

12/28/12: And it’s about time someone did. Diane Dietz has the story in the RG, which focuses on complaints from local minority leaders about lack of consultation. My view is very different. This office has been horribly mismanaged for years. Yvette Alex-Assensoh was brought in by Lariviere to change things, after a petition from more than 60 faculty, staff, and OAs. And it seems like she’s got the courage to make change happen. Good for her!

UO’s Diversity office was started by Dave Frohnmayer and John Moseley – but only after they lost a discrimination lawsuit to UO administrator Joe Wade, who forced them to create the office in his legal settlement: 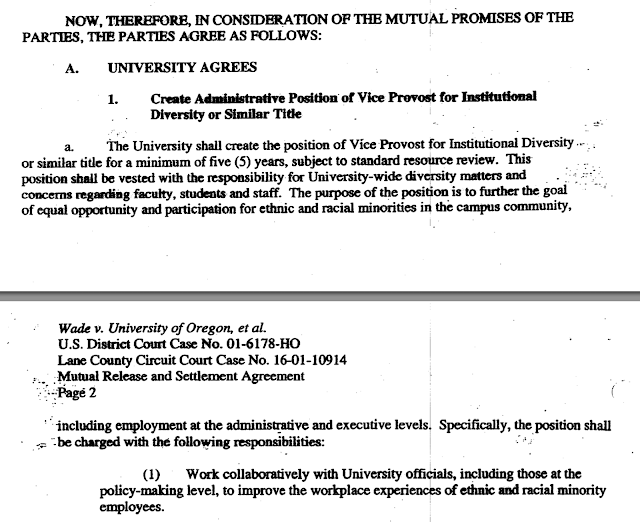 Frohnmayer even appointed insider Charles Martinez to run the Diversity office without conducting an AA compliant public search. And he let Martinez double dip at an off campus job. Not surprisingly, Martinez ran the office into the ground.

Eventually the faculty and the diversity office staff rebelled. I heard 60 people signed the letter of protest. Richard Lariviere then fired Martinez and held an open, public, AA compliant search for a new VP for Diversity. CAS Dean Scott Coltrane ran the search, with plenty of input from the local community – including many racial and ethnic minorities and community leaders, such as 4J superintendent George Russell, on the hiring committee. Coltrane held 5 “visioning sessions” to get input from various stakeholder groups, including local minority community groups. The hiring committee was a notably diverse group, in terms of race and ethnicity:

Three candidates came to campus, with well attended public meetings. UO then hired Yvette Alex-Assensoh from Indiana. She was the top pick of the committee. She has stellar credentials: poli-sci professor, law degree, administrative experience, and a record of real accomplishment. From her application letter:

Legally proper. Retention. Good jobs. I like. She started this fall. Give her a chance to set a long, long series of wrongs right.