What’s a college degree worth? 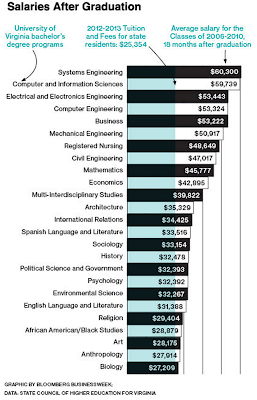 Lots of things. If you just compare the list price of tuition and fees and immediate average salary, you get this, for UVA.

Obviously this excludes the non-pecuniary benefits of 4 years of college fun and the lifetime benefits of knowing stuff, as well as career income. External benefits from a better educated population are also ignored. On the cost side it excludes the opportunity cost of 4 years of foregone income, and it does not account for scholarships – which probably go to the people who end up in higher paying majors.

The chart is from Bloomberg, the data is from CollegeMeasures.org, which will apparently will eventually produce similar data for the University of Oregon. I hope they start adding better controls – obviously this figure tells us nothing about the value added by college major, even if we restrict the dependent variable to initial income. Work like this should be taken with a block of salt.

4 Responses to What’s a college degree worth?