2/15/2013 Note: This post has a record number of comments, which have raised many issues in addition to those in the post. I want to apologize for the personal pain this post has caused for the instructors in the CNC program. As I’ve written in the comments, I think it would be a good thing for UO to have a course or two on sports and conflict. I’ve thought about teaching a course in sports economics myself. The law school now has a professor teaching sports law. These are all reasonable things for a university to teach. But 10 courses on this narrow subject are far too many. Upper division courses should have prerequisites, and tenure track faculty with research interests in the subject should be teaching at least some of them. This goes double for courses with graduate level credit. I think the CNC program has been mismanaged by the Law School, and that ultimately means by the Dean, Michael Moffitt.

The $1 million donation will establish two academic programs. The first is “Competition Not Conflict,” which will feature classes within the Knight Law Center that focus on conflict resolution in sports.

“We had years where this was just to us a good idea,” said School of Law associate professor Michael Moffitt, “and it is now with the Kilkennys’ gift that this can be more than just a good idea.”

Why did the faculty reject these courses? Consider CRES 410: “Football and Conflict”, conveniently taught in Room 101 of the Jaqua Center for Student-Athletes – or, as the NY Times calls it, “UO’s Jock Box”. The law school has been giving out 4 upper division undergraduate credits for this course, despite the fact it has no prerequisites. They’ll even give you graduate credits for it. They took tuition money from 89 students for this last fall. And what did those students learn? A UO Matters operative retrieved the final exam from the Jock Box dumpster: 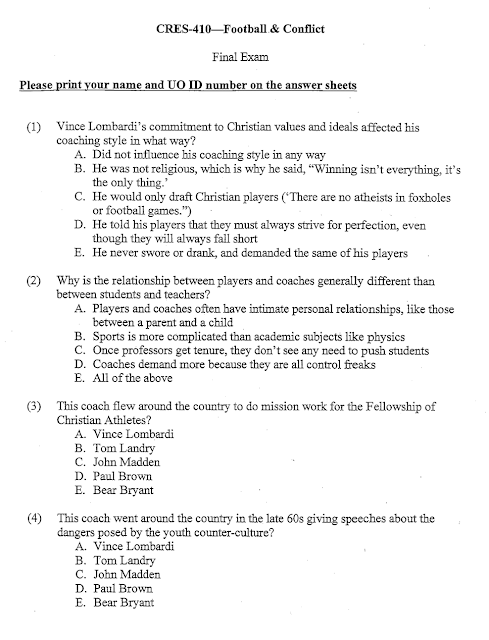 and this spring you can take

Sign up soon, because I’ve got a feeling it’s going to be a long, long time before the Law school lets these courses get taught again.

In totally unrelated news, Kilkenny’s “Lucky Duck” foundation has now given a total of $570,000 to Frohnmayer’s Fanconi Foundation. The timeline?

And Dean Moffitt still seems in denial about what’s really going with this program: In the NYT a day after I posted this:

At the University of Oregon, Michael Moffitt, the law school’s dean, has started clinics on nonprofit groups, environmental policy and probate mediation. He has also set up law courses for students in other parts of the university, which brings revenue to the law school.

“The problem is that we have been selling only one product,” Mr. Moffitt said. “But if you are getting a business degree, you need to know about contract law. City planners need to know about land-use law. So we at Oregon are educating not just J.D. students.

“Demand is through the roof,” he added. “I feel like I am living a business school case study.”

And what kind of life could top that? But go to the list of classes the law school is offering to undergraduates, here. About 250 students are enrolled in the kinds of solid courses Moffitt tells the NYT about. But 300 are in Kilkenny’s sports conflict courses. Probably a good idea not telling the Times that little detail. (Thanks to Anon for tip in the comments.) 2/11/2013.