The original architect of the independent board idea was Michael Redding, who is leaving UO any week now for UIC. So the ball is now in Mike Gottfredson’s court, as those sports boosters like to say. There are plenty of problems with this bill. The one that’s currently getting attention is the “No Faculty Allowed” amendment:

The PSU Senate is also backing off:

As is the AAUP and the AFT. The UO Faculty Assembly will presumably soon re-examine its support too. 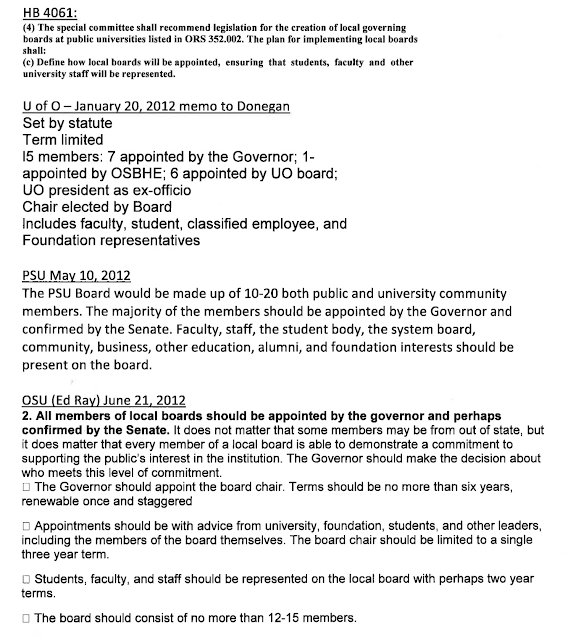 President Gottfredson’s public records office is trying to use public records fees to hide the details of what’s happening with these negotiations from the public and the press. Dave Hubin sat on this request from the Register Guard for more than two weeks before even giving out an estimate:

The University of Oregon has received your public records request for “all records generated or received by University of Oregon employee Betsy Boyd and UO President Gottfredson regarding proposed or draft legislation that would create a University of Oregon governing board or otherwise change the relationship between the UO and state government.The time period for the request is Nov. 1, 2012 to the present”, on 03/20/2013, attached. The office has at least some documents responsive to your request.  By this email, the office is providing you with an estimate to respond to your requests.

There’s already plenty of skepticism about the independent UO board proposal. Hiding President Gottfredson’s role in the process doesn’t strike me as a good strategy to take.

10 Responses to No Faculty Allowed