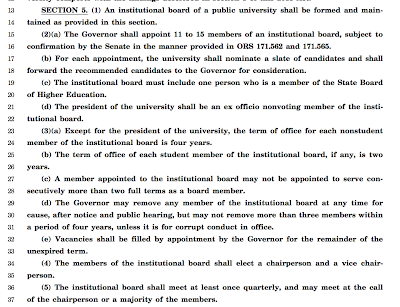 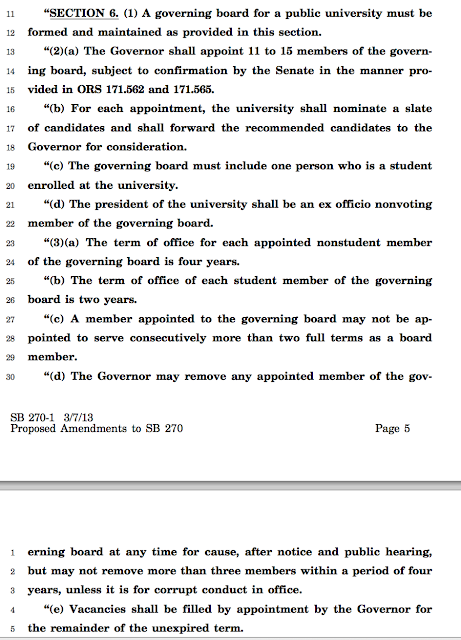 What ever happened to this?

At the Statutory Faculty meeting on November 30, 2011, we passed SFA 11/12-02: Motion for the Establishment of a UO Board of Trustees, which reads:

PROCESS FOR FORMING A UNIVERSITY OF OREGON BOARD

The UO faculty Assembly directs the Senate Executive Committee, or an ad hoc Senate Committee to be appointed by the Senate President, to initiate negotiations with State Legislative leaders and the Oregon State Board of Higher Education (or its successor), leading to the appointment of a University of Oregon Board of Trustees.

The scope of issues to be engaged in the discussion of the powers of this board shall include, but shall not be limited to:
1. The composition and appointment process of the Board
2. Operational oversight of the University
3. Setting of tuition and fees
4. Budgetary control
5. Contract negotiations and contract authority
6. Bonding authority
7. Acquisition of property
8. Status of legal counsel
9. Construction of buildings
10. Authority over the hiring and firing of the president of the UO.
11. Hiring and personnel policies for faculty and staff

I think that it is time for us to become more directly involved in this process, as parts of it seem to be going astray. As commenters have noted above, most of the proposed legislation deals with financial and legal issues of bonding, property ownership, liability, etc. The consideration of issues which may affect academic mission and quality is minimal, and would benefit greatly from substantive faculty input, both now and in the future. As a first step, I suggest that all faculty should contact their Senators with their concerns, and we should make it clear that the Senate Executive Committee has the full backing of the Statutory Faculty to carry out this motion that we passed last year.

Thanks to Peter Keyes for the reminder. It looks like the Senate has dropped the ball on this.

3/16/2013 update: I’m not sure why the Prazniak motion on shared governance did not come up in the UO Senate Wednesday.

Meanwhile there were hearings in the Oregon House on Friday on the legislation for independent university boards, SB270 and HB2149. Many people testifying in opposition to the current legislation which prevents faculty from serving on the board. The PSU letter suggests their faculty may retract their endorsement over this. The UO faculty need to consider doing the same.

3/11/2013 update: In the UO Senate this Wed, 3-5 PM, Roxann Prazniak (History, Clark Honors College) will be presenting a motion on the role of the union in enforcing the principle of shared governance. Important, given the likelihood we will soon be facing a powerful UO governing board with plenty of athletic boosters, and no faculty.

3/9/2013: There are two parallel bills in the Legislature. SB 270 and HB 2149 take you the legislature’s website. SB 270 seems farthest along, the Senate Committee on Education and Workforce Development is handling it. The links include testimony, etc. Very thorough: 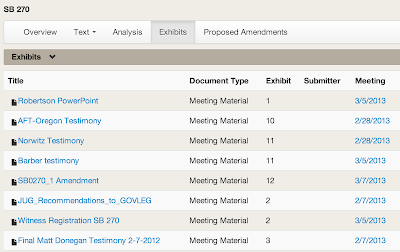 The original proposal called for 2 faculty on the board. The AFT’s testimony says:

But the latest proposed revisions in committee (p6) explicitly prevent the governor from appointing faculty or staff to the board:

And this also seems to further limit faculty power, to syllabi and books – with even that subject to board supervision:

Thanks to an anonymous commenter for the heads up. I encourage people to keep an eye on this. It looks to me like the faculty and the UO Senate are about to get rolled.

I’ll say it again: If you want to have any influence over UO’s future you need to join the faculty union and volunteer for their committee work. It’s all we’ve got left.