By uomatters | 04/25/2013 - 2:24 pm |04/25/2013 Uncategorized
4/25/2013 Prologue:
Synopsis:
Liveblog Disclaimer: This is my opinion of what people said, should have said, or should have wanted to say. Nothing is a quote unless in quotes. For the Luebke’s view of things see Luebke’s blog.
Rudnick: Here’s the counter. We’ve put majority of money in pay, since benefits are already at or near peers.

Mauer: Why? Rudnick gets pissed, doesn’t want to hear criticism. “You can argue whatever you want. This is what it is. This is our best offer. You can make all the accusations you want.” And I’m not going to get you donuts! Enter Asst Prof, with the donuts. Yumm. Some thoughtful person brought a bottle of Kahlua too.

Mauer: Why one pool for merit? Rudnick: We don’t want to institutionalize inequities. I don’t really know how to say this or how strongly our side feels about this. Mauer: We have an open mind, do tell us more.

Bunch of stuff on process.

Back of the envelope, over the 2 years of the contract, Gottfredson’s proposal is about 50% of the union’s proposal, and about 50% of what Lariviere had planned to implement by this year. The administration has abandoned the effort to get UO salaries to our AAU peers, that started with the 2000 Senate white paper. Comparator salaries here.

Gleason: We have separate pools to ensure NTTF’s get equity. (Actually, you took the separate pools out, Tim.) Long back on forth on appropriate policies, guidelines to determine merit.

Admins are fine with pools, rules for dividing merit money, so long as it’s just about chump change.

Q about equity: Rudnick says “we will get to that”. We agree NTTF floors are important, likes joint committee on NTTF compensation to deal with floors, classification. No money for floors, idea is that the committee will spend 18 months working out the details and then put something in next contract.

Rudnick: Equity. No one disagrees on the importance of paying AAU equitable salaries, but we spent all the money, so we will deal with that in the next contract, maybe. Mauer: Explain how things will be better in 18 months? Rudnick: You’re right. It’s just a hope. Maybe we’ll have spent it all on other important things by then. Mauer: Of all the things to de-emphasize, why equity? Rudnick: We want to get the base up and reward merit. But we don’t want to get the base up to the peer level. Sure, this was priority #1 for Lariviere, but for Gottfredson it’s like, uh, #17.

Mauer: Why doesn’t the joint committee get to look at equity? Rudnick: no answer. Davidson: Committee could do floors in a few months and get money out to people making < $36K for full time work. You are not willing to prioritize that? Rudnick: “We were trying to respond to what we thought your priorities. I am going to show you exactly where all the dollars are, in dollars. If you want to allocate it differently, we don’t care.” (Wait, didn’t you just say your cared about merit?) Mauer calls her on it. Rudnick again: “If you want to allocate money differently we are completely open to that. I’ll say it one more time…”

Cecil: What about our 10% promotion raises? Why did you cross it out? Blandy: I think it was addressed in the promotion article. Cecil: What sort of raises do you think you were proposing there? Blandy: We don’t know.

Retention: Blandy – we have been making retention issues but we haven’t made compression raises because we are bargaining. Mauer and Cecil: We have told you that you can make these raises. Are you going to keep claiming that you can’t because of the union? Green: Compression issues will get worse. Are you holding back money to deal with internal equity? Blandy: Once the contract is ratified, nothing prevents other raises. Rudnick looks at him, in horror. “Yes it does! Once you have a contract you don’t go giving people money willy-nilly” Green: So, what’s the admin’s plan to deal with internal equity now? Mauer: So, you are saying that your proposal the dean could match an outside offer, but not give raises to others in department. Cecil: Is there a retention raise policy? Blandy: No, but practice is you have to have a written outside offer. (Bullshit.) Green: So we could write in something saying for internal equity raises if someone in that department got an outside offer and then a raise. But then departments where no one gets an offer get nothing. Rudnick: right. Green: My read is that CAS is now way behind. Is that your read too? Gleason: My impression is that there’s variability within CAS. But he has no idea. Rudnick: HR only has one or two people, no one knows what’s going on. (Actually, they’ve got a $3.5 million budget.) Braun: Need to get away from the situation where people have to get an offer to address equity. We lose good colleagues, replacement searches are expensive,…

Rudnick: Retention raises are a band-aid.


Gleason: We are spending the money on other UO priorities, sorry. We’ll talk about a better mix of raises, but we’re not giving you any more money.

Mauer leans across the table towards Rudnick, lowers his voice to a barely audible, threatening whisper. “No?”

The room quiets. Mothers shush their children, and herd them out the door. The faculty inch their hands towards the baseball bats. Big Mark smiles, takes a last hit from his cigar, and closes the door. The lock clicks.

Mauer: “That’s all good. But we put a proposal on the table 5 weeks ago, with all the answers. You ignored it.”

Rudnick: No, that cost $26 million dollars and that’s totally unrealistic! We don’t have the money any more. These problems developed over the many years of Dave Frohnmayer’s faulty leadership and they cannot be resolved in the 24 months of this contract! Keeps shouting. There is no $26 million dollars!

Mauer: So, you spent it. That’s nice. Real nice. So, how about you put the rest of your economic proposals on the table. Now.

Rudnick: OK. She gives him a cold stare, and reaches slowly into her briefcase. There’s a glint of gunmetal, reflecting off her cold, polished fingernails.

Cecil sees it, and tries a distraction. “Wait! Before you go there, can you explain your costing again?”

Rudnick gets confused by all the numbers. She starts babbling again. The faculty ease back and start snickering at her. Hamilton grins, and passes his flask around.

Smooth work, Cecil. Looked like a 38 special. Not the sort of thing to fire off in the library, of all places.

Art 21: Fringe benefits. Adjuncts need access to UO email so students can contact them about letters, etc. Rudnick: That’s outweighed by worry former faculty would misuse UO resources. Cecil goes to town on her, hilarious. But lets get the rest of their crap on the table. Rudnick: No child care vouchers, Gottfredson spent that money on my fees: 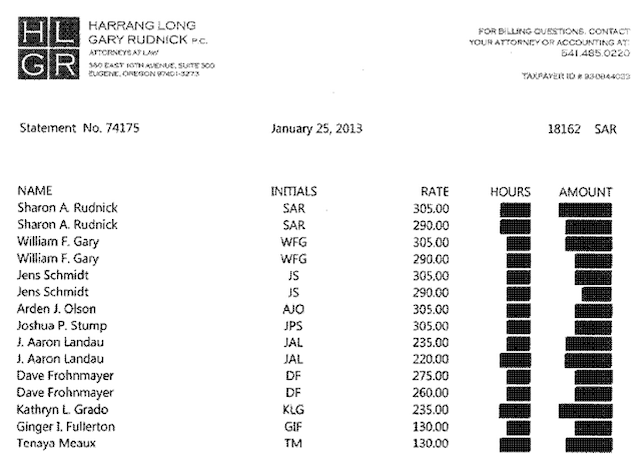 Art 24, leaves: Rudnick: We won’t agree to the faculty leave bank. Too complicated and HR only has a $3.5M budget. Faculty must report if they use sick leave. (UO tried that 10 years back – had to send our office manager an email every month reporting if we’d used any sick leave. Lasted for about 6 months.)

I’m not worried about any of this, if I get pregnant and don’t have enough accumulated leave, Provost Bean will just give me a sabbatical.

Green goes to town on them over pregnancies and lack of support for women faculty, raising her voice. Blandy: You’re shouting at me. Green: Yes, I am.

Why does Blandy sit there whenever Rudnick shouts about how demeaning it is to be called “The Administration”, but it’s not OK for Green to shout about pregnancy support?

Rudnick: Can we move on? Cecil: What about pregnancy leaves for career NTTF’s? Rudnick: A lot of people looked at this, we’ll have to go back to them. Cecil has this down cold, gives her a list of inconsistencies. Rudnick sounds like she’s reading this for the first time, searching “… uh, lets see, um, … duh, … um, …., or something…” We took this out of the OARs, except where we didn’t….

Art 23: Retirement Benefits:
Rudnick: Wait, this has a significant error, give it back! University will make all required contributions, actually we are agreeing to continue making the PERS pickup too, unless law prohibits it. I’ll send you it this afternoon. Cecil: But you wouldn’t make faculty whole if the state bars the pickup? Why not? Rudnick: We were told if that passes, which is not likely, we would not subvert the intention. Gleason: Our interest would be to spend that new money on faculty, but we don’t want it in the contract that we intend to ignore the legislature’s intent. Cecil: WOU etc have that contract language though.

Art 32: Sabbatical:
Rudnick: Comes from statute or OAR and I believe the current reality. (How did Bean, Martinez, and Frohnmayer get those sabbaticals again?) Cecil and Green are all over this. Rudnick and Blandy are confused. Green: It’s a university policy to promote sabbaticals. Rudnick: We don’t have the money to pay more! We spent it all on Bean’s sabbatical:

“The dollars aren’t there given the current priorities for spending dollars. You have to prioritize!” Davidson: Has any thought gone into thinking about how sabbatical improves UO visibility, new grants? Rudnick: No. UO gets its national visibility by subsidizing the Duck athletics brand. It wouldn’t be fiscally prudent to shift those dollars towards faculty research sabbaticals.

Art 22, Health Insurance:
Rudnick: This is not our proposal, it comes from OUS, it’s the proposal they are making to SEIU. Cecil: This is a massive increase in what faculty will have to pay. Rudnick: Yes. We are hoping this will go away.

Rudnick passes out Moffitt’s cost estimates. Cecil goes to town on the question of how much of the cost will from central, and how much from auxiliaries which, by state law, are supposed to be self-supporting. Then asks if there is reality to threats that raises for people in say PE, Music will lead to layoffs, asks if Admin will consider language that would protect people. Rudnick says yes.