6/20/2013: Louise Bishop, English and HC and co-chair of the FAC this past year, defends Gottfredson in an op-ed in the RG here, in reaction Gordon Sayre.

6/13/2013: An Op-Ed in the RG by prof of English and former senate president Gordon Sayre:

… We may never know why Lariviere was fired, but it seems obvious where Gottfredson’s priorities lie: He wants a UO board stacked with wealthy donors such as Nike co-founder Phil Knight or his allies. The unstated promise is that these boosters will give millions to the UO that they were unwilling to give before they could be appointed to the board.

Yet for nearly a decade Knight himself has given money only for UO athletics, not for our academic mission. In light of that history, what should the UO, and Eugene, really expect from an independent UO board? President Gottfredson needs to deal openly with UO faculty, staff and students and clarify his plans and priorities for budgets, tuition, salaries and academic excellence.

If you want to get a glimpse of how Phil Knight, the biggest supporter of an independent UO board, might treat ours, watch this video of this talk at Joe Paterno’s memorial, “Who are the Real Trustees?”: 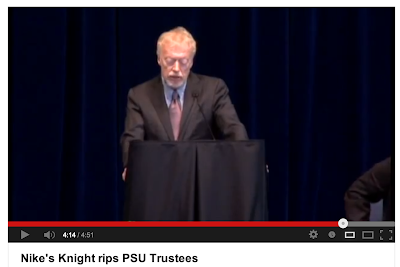 This Oregonian story reports that Knight has appointed Duck athletics booster Pat Kilkenny as trustee of several Nike stock trusts. Not exactly a good sign for the academic side for anyone who has followed Kilkenny’s successful efforts to use academic money to subsidize sports.

If you want an honest discussion of the pros and cons of independent boards, read this letter from OSU’s president, Ed Ray, or watch this video: 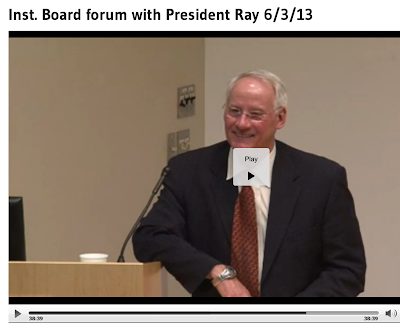